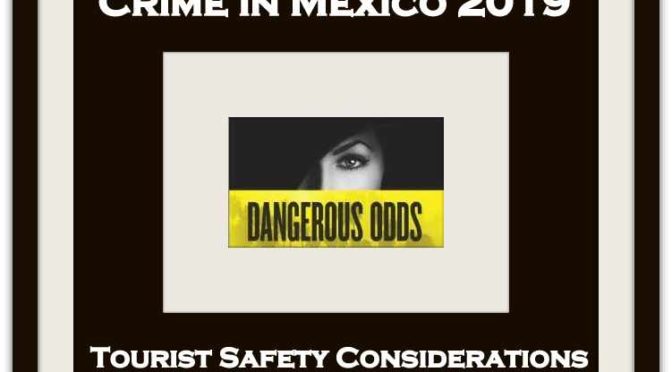 I am frequently asked about the current state of safety for tourists considering travel to Mexico. Frankly, it’s a loaded question. The answer to the question has many dimensions. The following is an article about Crime in Mexico – Tourist Safety Considerations for 2019.  Perhaps the article will help inform those who are considering a visit, vacation or retirement in Mexico in the near term. I urge you to conduct your own, in-depth, independent research of this question – using a broad array of resources.

Crime in Mexico: Myth and Meaning

The perception vs. the reality of crime in Mexico is an enigma. An enigma is something that is difficult to understand. This is particularly true for tourists planning a visit, vacation or retirement in Mexico. Let me explain.

Tourism in Mexico is BIG BUSINESS:

The first thing that tourists considering Mexico as a travel destination need to appreciate is that tourism in Mexico is BIG BUSINESS. Tourism and travel provide an estimated 16% of total employment in Mexico. According to the World Travel & Tourism Council’s report on Mexico for 2018, travel and tourism made direct contributions to Mexico’s GDP of US$82.2 billion or 7.1% in 2017 and a total contribution to Mexico’s GDP of US$185.4 billion or 16.0% of GDP in 2017 (the last year figures are currently available). Tourism provides Mexico with its third largest source of foreign exchange behind Mexico’s automotive industry and remittances sent home by Mexicans working outside the country.

It is important to understand several things about tourism in Mexico. First, there are non-Mexicans who earn their living by marketing tourism to Mexico. They are based both inside and outside of Mexico. These Gringos are interested almost wholly in one thing: moving the money in your purse or wallet to theirs. There is an entire industry of print and on-line publications that cater to attracting foreign visitors to Mexico. Then there are forums, YouTube, Facebook and a myriad of other websites designed to attract visitors. For the Gringos based in Mexico, you will find them selling real estate, time share accommodations, guided tours, and special trips to see the sites.

Tourism requires marketing, just like any other business. There’s nothing wrong with that. However, when those paid to sell you a perception – where that perception diverges from the reality, that’s when things become unwholesome. Sometimes, “selling the dream” can become selling an illusion that can compromise the health, safety and welfare for the visitor and/or tourist.

It has recently been reported that crime in Mexico is impairing the established tourism industry. Alejandro Zozaya, CEO of Apple Leisure Group declared that Mexico’s high-end tourism market has declined 20% in 2019, and will continue to decline throughout the year. The National Chamber of Commerce and Tourism Services reported in February 2019 Puerto Vallarta received between 10-13,000 reservation cancellations due to the ongoing lawlessness in Mexico; An economic loss of some 400 million pesos for the Puerto Vallarta area. Cancun has also suffered a decline in tourist visits in 2018.

The point to the above is that tourist decisions about where to travel are distinctly impacted by perceptions. Personal safety perceptions are paramount in the process of assessing the safety of your destination. The ongoing increase in violence in Mexico over the past two years is being recognized by prospective tourists and retirees. They are rethinking Mexico as a preferred travel destination.

Remember, you are a target of a big business machine as a prospective tourist or retiree in Mexico. Don’t allow their perception to be summarily adopted by you without your own, independent inquiry. Do your homework. Don’t be deceived.

Public Safety in Mexico is Fluid

Mexico is a massive geographic entity. Like any nation, it has areas that are more dangerous than others. However, an area declared as safe one month may become unsafe the next, without warning. Public safety in Mexico is fluid and ever-changing. You cannot depend on U.S. State Department country travel advisories. As of March 2019, these travel advisories have not been updated since November 15, 2018. Much has changed from November to March in Mexico.

You will not get accurate, real-time information on crime and violence in Mexico via typical tourist websites or publications. Your best sources are English language news outlets based in Mexico. Depending on the area you are considering to travel to, you can find these sources via internet research. In the Guadalajara area, I recommend MexicoNewsDaily.com and TheGuadalajaraReporter.net. These two publications also provide national news throughout Mexico. For English speaking travelers, connect yourselves to multiple sources of English language media outlets in Mexico – months before you finalize your travel plans.

You should also explore finding someone who resides in Mexico who can recommend someone to guide you during a visit – who understands the culture, communities, customs and language. There are highly regarded individuals who are available to perform this service for you, who will be happy to share the frank realities with you.

Stay away from bars and rowdy restaurants after dark…even in tourist areas.

Watch out for faux UBER, Lyft and taxi drivers. Make certain you agree on the fare to your destination before you get in.

The reality of the current, tangible threats to public safety in Mexico are being observed internationally. The decline in tourist visits is representative of this reality. Let’s take a look at separating myth from the meaningful. Before we do, here are a few additional considerations.

For your health, don’t eat fish from local lakes or rivers, fruits and vegetables from local markets (without scrubbing with anti-bacterial agents) drink any water other than bottled water, and don’t become intoxicated. Bring insecticide as Zika Virus and Dengue Fever are transmitted by mosquitoes in certain areas. Apply sunscreen. Don’t leave valuables in your hotel room or rental car. Don’t wear expensive watches or jewelry. Be kind and polite. Refrain from criticism, complaints, or outbursts of anger or frustration. Always ask permission before you decide to snap photographs of local people…ask parents before you take a photo of their children. You’re a guest…act like a grateful one. Smile…a bunch. Express sincere gratitude for the same shown to you. The people of Mexico are the most wonderful I have ever encountered in any nation…especially local folks. They are proud and grateful for this life, just as you are.

Have a translator set up on your phone. Learn Spanish.

Myth and Meaning – Crime in Mexico

A few residents in the Lake Chapala area have attempted to “nuance the narrative” of the surge in violent crime in Mexico by suggesting “this happens every six years when Mexico has a national election.” (This is the “This is normal – don’t worry – be happy – come on down” narrative. Imagine how that goes over with the families and friends of victims). Don’t buy into this irresponsible nonsense. Statements like this beg to be investigated further. Particularly when the Mayor of Chapala has asked for the deployment of the Mexican Marines, Army and Navy to the area, the Chapala Police Chief has resigned, seven amphibious police officers were arrested for dealing dope and possession of illegal weapons, and more than 7 people have been murdered in the last six months (including a 78 year old Canadian expat) in that tiny area alone. But – you wouldn’t know this without reading this article. Kidnapping and extortion are vastly more common in Mexico versus the U.S. and Canada.

Mexico ranks near the bottom of all the nations on Earth regarding impunity and transparency. Translation: In Jalisco (Guadalajara and Lake Chapala area), if you report a crime and an investigation is initiated, you have an 0.67% chance of someone being arrested for that crime (Source- Lake Chapala Reporter -March 2019). Furthermore, an audit found that the crime statistics for the state of Jalisco reported to the national Mexican authorities were falsified from 2015-2018…reporting only 70% of the actual crimes reported to authorities (discovered via a recent audit of the same). Over 50 people were murdered in Jalisco alone during the first week of December 2018. The point is, there are vastly more threats to public safety in Mexico than reported. Reuters reports that homicides in Mexico increased 33 percent in 2018, breaking the national record for the second consecutive year (33,341 in 2018 vs. 25,036 in 2017. The figure in the U.S. for 2017 was 17,284).

Another myth is based upon shallow cross-cultural comparisons. There are currently 325 million people residing in the U.S. vs. 129 million in Mexico. Thus, for homicides alone, one has a vastly higher probability of being murdered in Mexico vs. the U.S. In 2018, Forbes declared: “More Americans were reported killed by homicide in Mexico than the combined total of Americans killed by homicide in every other country abroad.”

Every victim of crime has one thing in common with all other crime victims; “That will never happen to me.” Don’t be an unwitting victim of this myth in Mexico…or anywhere else.

Mexican President Andres Manuel Lopez Obrador has suggested “the war against the cartels is over.” Really? In Michoacan, the cartel violence is worse than it was in 2013. The same is true in Jalisco and other Mexican states.

Prospective tourists and retirees are now wondering aloud on social media platforms: “Is Mexico a paradise or a pair o’ dice?” The current public safety reality in Mexico legitimately demands the legitimate expression of this concern.  Honestly,  everyday living has its risks. International travel, vacations or retirement to areas with which you are remotely familiar, require further in-depth investigation. Currently, Mexico deserves a much more serious investigation prior to finalizing your travel plans. We reside on an expansive planet with many marvelous travel destinations to consider. Travelling to destinations you desire to visit or live need not include a roll of the dice – particularly when the outcome may include higher probabilities of harm to you and your loved ones.

Mexico needs to clean up its act. Nuanced narratives, outright deception, purveyors of solely positives, and political spin just won’t cut it anymore. An ongoing decline in tourism to Mexico may provide the essential inspiration to implement the tangible changes that are long overdue. Both the Mexican people and tourists considering Mexico deserve just that. It will take decades, perhaps a generation or two, for this essential progress to become a reality. Until then, Mexico will remain a destination where significant, additional precautions are essential to preserve your personal safety.