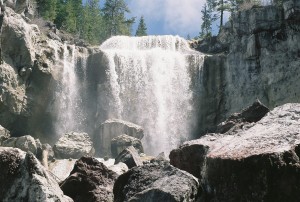 Echo – A Refresher for Context

You need a couple of things to produce an echo:

3.      A sound lag – the reflection of the sound must be composed of a time lag to be distinguished from the original sound.

When you think about it, echoes have something in common with our other senses:

Let’s imagine that you awakened tomorrow and the following had occurred: Your ability to taste took a minute or so for food to register with your taste buds. The entire process of eating would be rearranged. (We would probably eat less too). What if you laid your hand on the red hot coils of your stove but it took fifteen seconds to register hot with your sense of touch? What if your eyes required ten seconds to recognize color? If you couldn’t recognize the smell of smoke for ten minutes after it initially hit your nostrils, the effects from the delayed ability to react to the impending danger would be catastrophic. The point is that we humans are designed with an array of sophisticated sensory equipment. We hear, taste, touch, see and smell in distinctly similar ways. This magnificent engineering allows us to share and celebrate common sensory experiences in life – together.

Echonomics – Recognizing the Role of Memory

The current global economic conundrum has illuminated two, often overlooked, additional dimensions of the role of the echo. The first is that our minds have the ability to recall the sensory experiences of the past. Memory is an echo. The echoes of previous U.S. economic crises have an uncanny tendency to continue to ricochet throughout the corridors of time. These echoes impact our cognitive ability, as we attempt to comprehend and deal with various dimensions of the current economic crises. Today in the U.S., we hear the most immediate, resounding echoes of our economic infrastructure creaking; Lehman Brothers crashing, the pounding of another foreclosure notice or for sale sign on the front lawn of another neighborhood home, AIG, Freddie and Fannie bellowing for capital infusions, IndyMac and Washington Mutual collapsing, the flow of capital throughout the financial system becoming an annoying drip, government loans to address the cries in the ward of the ailing American auto industry, and the breaking apart of Merrill and Citigroup, to name only a few. These current day echoes send our minds searching for similar sounds within the recesses of the history of our nations economic system – The Great Depression, downturns in the 70’s, 80’s, 1990 – 91 and 2001. Yet, as we process the echoes from our past, we quickly realize that our past does not equip us adequately to deal with these unprecedented times. At best, these memories echo the fact that the lessons learned during previous, comparable, economic eras in our history, require the immediate development and implementation of new forms of fiscal policy to address our current predicament.

What we hear from the past does not always equip us adequately to deal with today. However, in this sense, echonomics provides us with an inescapable component of our ability to evaluate and attempt to comprehend the current crises. Echonomics supplies a terribly valuable capability; it allows us to exclude attempts to apply old approaches to the distinctly unique economic challenges confronting us today. As one publication confirms: “America’s GDP may have fallen by an annualized 6% in the fourth quarter of 2008, but most economists dismiss the likelihood of a 1930s-style depression or a repeat of Japan in the 1990s, because policymakers are unlikely to repeat the mistakes of the past.” [i]

The second most often overlooked dimension of echonomics is that it leads us to look beyond the obvious. Echoes are invisible to the human sense of sight. The loudest, most prominent echoes garner and dominate our attention. A shotgun blast discharged at the bottom of the Grand Canyon obscures the echo of a young boy shouting at the same moment the round was fired. Yet, science has harnessed the use of the echo as a measurement tool. This is basically how sonar works; by electronically analyzing the echo time lag of sound waves. Sonar determines the existence, distance and location of objects beneath the surface of the sea that we cannot ascertain with our human senses alone. In this sense, echonomics implores us to become aware of the existence of conditions beneath the surface of the most apparent, easily recognizable attributes of the current economic crisis. How do we do this?

We rely upon measures like consumer confidence[ii], unemployment figures[iii], the consumer debt index[iv], and foreclosure data[v]. Interestingly enough, these are measurements that were developed in the distant past. Yet, as London School of Economics Professor Charles Handy once wrote:

I find it very interesting that the awareness of the depth, breadth and complexity of current U.S. economic crises did not come from interviews with families who were losing their homes to foreclosure, broadcast by the major U.S. media outlets. When we experienced the thundering crash of Lehman Brothers, Fannie and Freddie reverberating through the economic headlines, the government U.S. became deafened to the distress signals of individuals, families and small business – I refer to this as echollateral damage: the echo from significant organizational/institutional failures in the economic sector drown out the distress signals of the smaller units within the overall economy – particularly the U.S. consumer and small business.

Clearly, the most immediate and tangible attempts to address the current crisis by the Federal Reserve, the U.S. Treasury and the U.S. Congress have been targeted at repairing the prop in the financial services sector of the economy. At the same time, the sonar readings indicate that the pain of the U.S. consumer has risen precariously close to the hull of the good ship USS Economy.

Is the U.S. economy in danger of running aground or do we remain capable of navigating away from the ever encroaching possibility of a hull breach?

It’s time to pay attention to the rapidly increasing frequency of the bleep, bleep, bleep emanating from the echonomics sonar. There has been a seismic shift on the sea floor of the U.S. economy whose shock waves have created the tsunami we are presently dealing with on the surface. The depth charts we have used to guide our navigation during previous voyages through these types of rough seas have changed materially. The rise in unemployment, the systemic depletion in the asset values of 401K, savings and brokerage accounts, the rise in default rates on mortgages and other consumer credit related obligations, and the fact that for millions of American consumers, the value of their primary personal residence now exceeds the mortgage(s) due; well — this factual reality has risen to such a level that trillions of gallons of liquidity have evaporated from the oceans of capital in this economy. Draft is a term that can be used to describe the depth of water a vessel requires when loaded to navigate safely. Presently, the USS Economy is heavily burdened and the sea floor has risen to create a situation where our vessel is precariously close to running aground and breaching the hull.

The purchasing power, employment stability, creditworthiness and liquidity of the U.S. consumer have always contributed mightily to the essential depth and buoyancy the USS Economy requires to sail safely and effectively. These factors enhance our ability to prosperously and confidently navigate into the future.

It has been said that “social crises…become apparent only when those who bear the scars of the crises speak out, insisting that their stories become part of the public dialogue.”[vii] Perhaps it’s time that we garner a renewed appreciation for the practical reality of the concept of echonomics that has been illuminated herein: The voices of those whose lives who have been substantively overlooked in the current economic crisis require our public policy makers to listen differently…to not only attend to the thundering echoes of institutional and infrastructure failures, but turn their attention to those whose cries remain muted as they attempt to call attention to their plight, amidst the rubble. Let’s not overlook the power in the fact that “courage is contagious. It overcomes the silence and fear that estrange people from one another.”[viii] Let’s not underestimate the constructive possibilities for truly recognizing the presently muted voice of the American consumer, the American homeowner, the American small business community, and the American family.

It has been suggested that “When economics is the main model for our common life, we are more and more tempted to put ourselves in the hands of the manager and the expert.”[ix] This treatment of the concept of echonomics is a reminder to those so empowered, to turn their attention to the plight of those American voices that remain muted by the more prominent echoes of institutional and infrastructure crashes.

As Professor Handy said above, to fail to adequately measure and address these concerns is a form of blindness we cannot afford to avoid any longer. May this wisdom echo across our land.

2 http://www.conference-board.org/economics/ConsumerConfidence.cfm This index is now at historic low as of January 2009. This measure has been in use since 1967.

8 Rogat Loeb, Paul The Impossible Will Take A Little While – A Citizen’s Guide To Hope In A Time of Fear Copyright © 2004 by Paul Rogat Loeb, Basic Books – Perseus Books Group, NY,NY p. 11