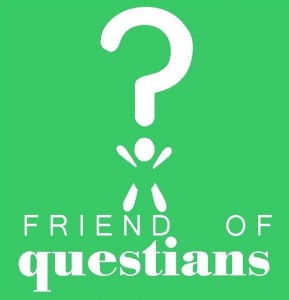 I am often asked for “reading recommendations.”

The following are some of the books I have enjoyed during the last two years,exploring the dimensions of “What’s a Questian?” I hope you might enjoy a few of them as well during the Summer of 2011.

People are yearning for a different label to apply to their Christian faith, political affiliation or important dimensions of themselves rather than the traditional ones that are infected with all sorts of attitudinal, experiential and socio-political baggage. “Christian” doesn’t work anymore in the postmodern, western, developed world. The term has become irretrievably corrupted. It’s a conversation killer. It’s as much a polarizing influence as the terms Democrat, Independent or Republican (to name only a few). I began to think about this phenomenon – intentionally. I adapted. I developed an audible mechanism when people inquired about my faith. I would say, “I’m a Christian, but…” (audible emphasis on but). Guess what? It didn’t work. I made the firm decision to move beyond being the ‘but’ in response to somebody else’s question.

At this juncture, several years ago, I began to intentionally study the impact that language and labels have on human relationships, identity and human potential. Throughout this process, I was led to many different topics and domains like genetics, neuroscience, public policy, international relations, social-psychology, organizational behavior, philosophy, theology, economics, spirituality, psychology, history, social movements, sociology, curiosity, innovation, how we learn, human development, creativity, compassion, community, consequences, courage, culture, invention, exploration and discovery.

Please note: that many of the titles recommended below have been reviewed here on this site – or you might find my review on Amazon:

The reading list below includes some of the books I have read during this journey, exploring the dimensions of “What’s a Questian?”

Armstrong, Karen MUHAMMAD – A Biography of the Prophet, HarperSanFrancisco – A Division of HarperCollinsPublishers, New York, NY Copyright © 1992 by Karen Armstrong.

Barabasi, Albert-Laszlo BURSTS – The Hidden Pattern Behind Everything We Do, Dutton – The Penguin Group New York, NY Copyright © 2010 by Albert-Laszlo Barabasi

Bilton, Nick I Live in the Future and Here’s How It Works, Crown Business New York, NY Copyright © 2010 by Nick Bilton,

Burke, Spencer and Taylor, Barry A Heretics Guide to Eternity, Copyright © 2006 by Spencer Burke. JOSSEY-BASS Publishers, A Wiley Imprint, p. 225 (This citation is from a pre-publication copy of this book. The citation may differ in the published version of the book.).

Burton, Robert A. M.D. On Being Certain – Believing You Are Right Even When You’re Not, St. Martins Press, New York, NY Copyright © 2008 by Robert A. Burton, M.D.

Carr, Nicholas THE SHALLOWS – What The Internet is Doing To Our Brains, W.W. Norton & Company New York, NY Copyright (c) 2010 by Nicholas Carr

Cooper Ramo, Joshua The Age of the Unthinkable – Why The New World Disorder Constantly Surprises Us and What We Can Do About It Copyright © 2009 by Joshua Cooper Ramo – Little, Brown and Company New York, NY).

Cox, Harvey Fire From Heaven – The Rise of Pentecostal Spirituality And The Shaping of Religion in the Twenty-First Century Da CAPO Press, Copyright (c) 1995 by Harvey Cox p.315

Csikszentmihalyi, Mihaly The Evolving Self – A Psychology for the Third Millenium, Harper Perennial – A Division of HarperCollinsPublishers, Copyright © 1993 By Mihaly Csikszentmihalyi.

Dweck, Carol S. Ph.D. Mindset – The New Psychology of Success – How We Can Learn to Fulfill Our Potential, Ballantine Books – an imprint of The Random House Publishing Group, Copyright © 2006 by Carol S. Dweck Ph. D.

Farrell, Greg Crash of the Titans – Greed, Hubris, The Fall of Merrill Lynch, and the Near-Collapse of Bank of America, Crown Business, New York, NY Copyright © 2010 by Greg Farrell.

Feiler, Bruce Abraham – A Journey To The Heart of Three Faiths, William Morrow-An Imprint of HarperCollinsPublishers. Copyright © 2002 by Bruce Feiler.

Fischer, Louis The Essential Gandhi – An Anthology of His Writings on His Life, Work and Ideas, Vintage Books – A Division of Random House, Inc. New York, NY Copyright © 1962 by Louis Fischer.

Fowler, James W. Stages of Faith – The Psychology of Human Development and the Quest for Meaning, HarperSanFrancisco – a division of HarperCollinsPublishers, Copyright © 1981 by James W. Fowler.

Fox, Justin The Myth of the Rational Market – A History of Risk, Reward and Delusion on Wall Street, Harper Business – A Division of HarperCollinsPublishers New York, NY Copyright © 2009 by Justin Fox.

Friedman, Thomas A. Hot, Flat & Crowded- Why We Need a Green Revolution and How It Can Renew America, Copyright © 2008 Farrar, Straus & Giroux New York, NY.

Glassner, Barry The Culture of Fear – Why Americans Are Afraid of the Wrong Things, Basic Books – A Member of The Perseus Books Group, New York, NY Coyright © 1999 by Barry Glassner.

Gorenberg, Gershom.  The End Of Days- Fundamentalism and the Struggle for The Temple Mount, Oxford University Press, NY © Copyright 2000 by Gershom Gorenberg.

Imparto, Nicholas and Harai, Oren Jumping The Curve – Innovation and Strategic Choice in an Age of Transition, Jossey-Bass Publishers San Francisco Copyright © 1994 and 1996 by Jossey-Bass, Inc.,

Johnson, Steven The Ghost Map – The Story of London’s Most Terrifying Epidemic – and How It Changed Science, Cities and the Modern World, Riverhead Books, New York, NY Copyright © 2006 by Steven Johnson.

Johnson, Steven The Invention of Air – A Story of Science, Faith, Revolution, And The Birth of America, Riverhead Books – Published by The Penguin Group New York, NY Copyright © 2008 by Steven Johnson.

Kushner, Harold S.  How Good Do We Have to Be-A New Understanding of Guilt and Forgiveness, Little, Brown and Company Boston, MA Ó Copyright 1996 by Harold S. Kushner.

McDonald, Lawrence G.  with Robinson, Patrick A Colossal Failure of Common Sense – The Inside Story of the Collapse of Lehman Brothers by Crown Business – an imprint of Crown Publishing Group, a division of Random House Inc. NY, NY Copyright © 2009 by Lawrence G. McDonald and Patrick Robinson

McGee, Susan Chasing Goldman Sachs – How The Masters of the Universe Melted Wall Street Down … and Why They’ll Take Us to The Bring Again, Crown Business New York, NY Copyright © 2010 by Suzanne McGee.

McLean, Bethany & Nocera, Joe ALL THE DEVILS ARE HERE – The Hidden History of the Financial Crisis, The Penguin Group New York, NY Copyright © 2010 by Bethany McLean and Joe Nocera.

Merton, Thomas No Man Is An Island, Published by Barnes & Noble, Inc. New York, New York by arrangement with Harcourt, Inc., Copyright © 1955 by The Abbey of Our Lady of Gethsemani, Copyright renewed 1983 by the Trustees of the Merton Legacy Trust

Miller, Peter The Smart Swarm – How Understanding Flocks, Schools and Colonies Can Make Us Better At Communicating, Decision Making and Getting Things Done, The Penguin Group, New York, NY Copyright © 2010 by Peter Miller.

Ouradnik, Robert Growing Spiritually – Without Getting Bogged Down In Religion, BookSurge, Copyright © 2009 by Robert Ouradnik.

Patel, Eboo Acts of Faith – The Story of an American Muslim – the Struggle for the Soul of a Generation,  Beacon Press, Boston, Massachusetts Copyright 2007 by Eboo Patel.

Patterson, Scott THE QUANTS – How a New Breed of Math Whizzes Conquered Wall Street and Nearly Destroyed It, Crown Business, an imprint of the Crown Publishing Group, a division of Random House, Inc. New York, NY Copyright © 2010 by Scott Patterson.

Pink, Daniel H. DRIVE – The Surprising Truth About What Motivates Us, Riverhead Books, A Member of the Penguin Group (USA) Inc. Copyright © 2009 by Daniel H. Pink.

Power, Samantha A Problem From Hell – America In An Age of Genocide, Perrenial – An Imprint of HarperCollinsPublishers, New York, NY Copyright © 2002 by Samantha Power.

Reich, Robert B. AFTERSHOCK – The Next Economy and America’s Future, Alfred A. Knopf New York, New York Copyright © 2010 by Robert B. Reich.

Rogat Loeb, Paul The Impossible Will Take A Little While – A Citizen’s Guide To Hope In A Time of Fear Copyright © 2004 by Paul Rogat Loeb, Basic Books – Perseus Books Group, NY,NY

Shenk, David The Genius In All of Us – Why Everything You’ve Been Told About Genetics, Talent and IQ is Wrong, DoubleDay – a Division of Random House, Inc. New York, NY Copyright © 2010 by David Shenk

Shiller, Robert J. The Subprime Solution – How Today’s Global Financial Crisis Happened and What to Do About It, Princeton University Press, Princeton, New Jersey Copyright © 2008 by Robert J. Shiller.

Stipp, David The Youth Pill – Scientists at the Brink of an Anti-Aging Revolution, CURRENT – an imprint of the Penguin Group (USA) Inc. New York, NY Copyright © 2010 by David Stipp

Taylor, Steve The Fall – The Insanity of the Ego In Human History and The Dawning of a New Era, O-Books – an imprint of John Hunt Publishing Ltd. Hants, U.K. Copyright (c) 205 by Steve Taylor

Wagner, Tony The Global Achievement Gap – Why Even Our Best Schools Don’t Teach The New Survival Skills Our Children Need – And What We Can Do About It, Basic Books – A Member of The Perseus Books Group, New York, NY Copyright © 2008 by Tony Wagner

Wallis, Jim The Soul of Politics – A Practical and Prophetic Vision For Change, The New Press, New York, NY Copyright © 1994 by Jim Wallis.

Wallis, Jim.  God’s Politics-Why the Right Gets It Wrong and the Left Doesn’t Get It, HarperSanFrancisco San Francisco, CA Ó Copyright 2005 by Jim Wallis.

Wells, Ronald A. History Through The Eyes of Faith – Western Civilization and the Kingdom of God, Harper San Francisco – A Division of HarperCollins Publishers, Copyright © 1989 p. 82-83