Tapping on the Walls of The Echo Chamber or “HUH?” 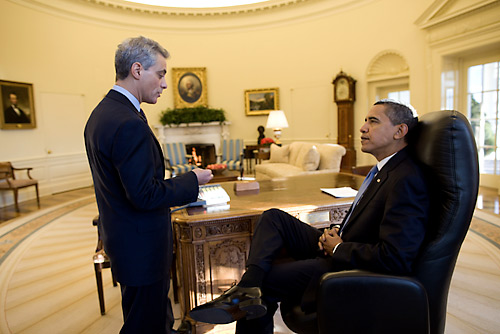 Photo above: From WikiMedia

In his NY Times column of September 5, 2010, Pulitzer Prize winning Princeton economist Paul Krugman yearns that the Obama administration might rediscover the virtues of “intellectual clarity and political will” – as prerequisites for proposing essential stimulus measures to reinvigorate the struggling U.S. economy.

Although I do not possess a Pulitzer Prize, a faculty appointment at Princeton, a column at the New York Times, have never taught at Yale, MIT or Stanford — Krugman and I have several, fundamental things in common: We care deeply about the current state of affairs in this country. We understand that the economic policy considerations that are proposed in the near term will have immense implications for the future vitality of our nation. Finally, we both feel like we’re tapping on the walls of an echo chamber – whereby the requisite “intellectual clarity and political will” are not likely to become realities until the audible sounds of fresh voices and new ways of thinking penetrate the echo chamber.

Here’s how Paul Krugman and I are different (I think – I’ve never spoken to Paul – never met him):

As President Obama is about to begin the exercise of promoting new economic stimulus measures, we hope that our tapping on the walls of the echo chamber might become audible. Let me explain:

Economist Joseph Stiglitz accurately summarizes the predicament of folks like us in America when he writes: “Today, a large fraction of Americans are also worried about whether they will be able to keep their home. The cushion of home equity, the difference between the value of the home and the mortgage, has disappeared. Some 15 million homes, representing about one-third of all mortgages nationwide, carry mortgages that exceed the value of the property.” [1] Bloomberg’s John Wasik characterizes the practical reality of this conundrum when he writes: “The loss of some $7 trillion in household wealth is an albatross around the neck of the economy (emphasis is mine). This dour effect is clipping a robust recovery. Millions who have little or negative home equity are shackled to houses they can’t sell and a debt burden that keeps them from moving ahead. They can’t save, either, although they desperately need to boost their cash reserves.”[2]

As the debate begins anew regarding what to do about housing finance in America, the dilemma of hardworking U.S. households like us, who are underwater on their mortgages – continue to be overlooked within the confines of the echo chamber. We don’t qualify for the federal programs that have been widely touted as flops to reverse the foreclosure crisis and keep people in their homes. Why? Because we are fortunate enough to remain employed, and are current on our mortgage. Yet, why doesn’t the possibility of revitalizing the most well-positioned segment of the American consumer enter into the economic policy discussions? According to the September 4, 2009 issue of Banc Investment Daily – “the US economy is almost 100% reliant on a consumer led recovery.” (emphasis is mine). Today, you hear this phrase everywhere; the consumer, the American consumer, consumer spending, waiting for a consumer stimulated recovery – Did you realize that consumer spending produces about two-thirds of all the economic activity in the U.S.? Well, households like ours are the American consumer.

15 million hardworking American households with underwater mortgages….must have a voice that penetrates the echo chamber. Let’s make another important point here: Homeowners who are NOT underwater have a vested, tangible, financial interest in resolving the underwater mortgage mess —- property values will continue to decline if Bank’s simply go to foreclosure on those underwater homes — which further accelerates the decline in ALL the surrounding property. Address the potential contribution of underwater mortgages to the ongoing foreclosure and you arrest a strategic dimension that currently contributes to the ongoing depreciation of U.S. residential real property values.

Factoid:  Freddie and Fannie have received some $150 billion in aid from the U.S. Treasury since September 2008 (that would be our money – the U.S. taxpayer) and they (Freddie or Fannie) either own or guarantee half of all U.S. residential mortgages. (Translation: If a Freddie/Fannie mortgage goes to foreclosure, the mortgage lender gets paid by Freddie or Fannie on the full amount of their note (U.S. taxpayer dollars).

Why not leverage the inevitable taxpayer liability by arranging the “mortgage relief credit”- a  20% reduction in the principal amount of the note each year, over five years — on the bonafide (via appraisal) “underwater” portion by Fannie/Freddie paying the lender direct for this principal reduction —- a tangible incentive for those underwater homeowners to stay in their homes – and keep their mortgages current —- this scenario uses federal funds that will be used anyway (should the underwater mortgage “go back” to the lender via foreclosure or short sale). At the successful completion of the 5 year program, the homeowner will be qualified for a Freddie/Fannie backed mortgage at a superb rate — say 3% for the remaining life of the loan — with a market valued mortgage principal obligation.

YET this is a positive incentive, vs. current “incentives” that currently encourage borrowers to simply “walk away,” enter into a short sale, or become delinquent on their mortgage obligation so they might “qualify” for the mortgage relief programs that are out there.

Perhaps this is the kind of “intellectual clarity and political will” that Paul Krugman was referring to.