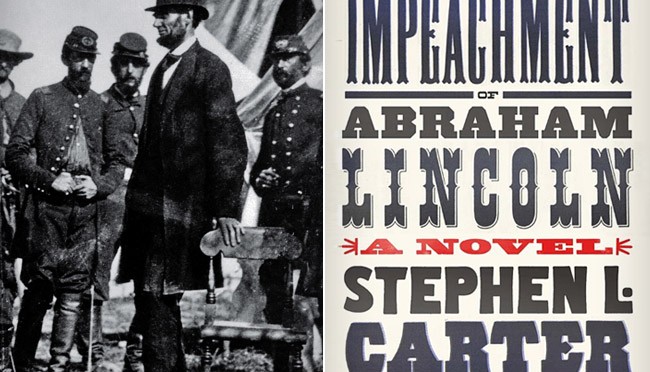 This is my second novel by Stephen L. Carter. (My first was Carter’s BACK CHANNEL) — It won’t be my last.

Carter is the master of historical fiction. The Impeachment of Abraham Lincoln is my second meal of his literary fare. Carter’s character development, dialog, plot and careful caricatures — provide the reader with a yearning to keep turning pages (ALL 655 of them in this case).

Carter’s historical fiction works are also educational…his twisting of historical events is insightful and provides insights into historical contexts that are absent from non-fiction treatments of the same.

Introduce a reader to Stephen L. Carter!!! They will appreciate your thoughtfulness and be back for MORE!!

Stephen L. Carter is the William Nelson Cromwell Professor of Law at Yale, where he has taught since 1982. A prolific writer who has published seven critically acclaimed non-fiction books during the past nine years, he has helped shape the national debate on issues ranging from the role of religion in our politics and culture to the role of integrity and civility in our daily lives.

Professor Carter, 46, was born in Washington, D.C., the second of five children, and attended the public schools of Washington, New York City, and Ithaca, New York. He received his bachelor’s degree from Stanford University and his law degree from Yale University. Before joining the Yale faculty, he served as a law clerk for Judge Spottswood W. Robinson, III, of the United States Court of Appeals for the District of Columbia Circuit, and for Supreme Court Justice Thurgood Marshall. He also briefly practiced law at a firm in Washington.

I was immersed in this marvelous book. You will be deeply satisfied you selected it as well. BUY IT! Read Stephen L. Carter!!!