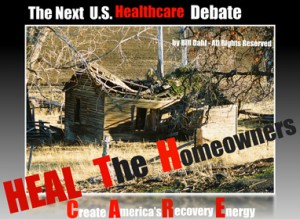 After listening to economists Paul Krugman and Raghuram Rajan on Fareed Zakaria’s Global Public Square this morning, I recalled many of the same points being made by Columbia University’s Joseph Stiglitz and Morgan Stanley’s Chief U.S. economist Richard Berner on Charlie Rose this week — We need to have The Next U.S. Healthcare debate….NOW!

Although the term healthcare is spelled the same, the use of this new sense of the term is distinctly economic in its application — according to these four economic heavyweights. The patient, in this sense, is the underwater U.S. homeowner.

HEAL The Homeowners – Create America’s Recovery Energy. Same spelling – different application of this use of the term.

According to this highly esteemed group of economic specialists, the patient, has breathing problems – the lungs of approximately 15 million households  are functionally impaired by virtue of  water in the lungs. Granted, the most immediate threat to the survival of the patient during 2007 and 2008 has been overcome by the surgical skills displayed during an Intensive Care Unit stay under the care of  Dr.’s Bush, Paulson, Bernanke and Geithner. The patient was transferred out of ICU and remains in “serious but stable condition.”

Yet, now a new set of distinguished specialists, (Krugman, Berner,  Rajan and Stiglitz) from distinctly different backgrounds and philosophical leanings all seem to agree on the priority for the next healthcare debate to get the patient’s respiratory system functioning properly….They all seem to agree that recovery requires energy – and that energy can, in fact, be created for the patient referred to as America 2011.

Water in the lungs, according to these economists, threatens the  current and ongoing recovery of the entire economic being. Of course, what type of procedure to employ and the cost of it all will be a part of the upcoming dialog.

“Anybody seen the pump?”