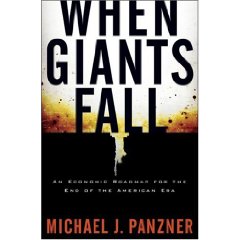 A Savant’s  Perspective on the Present Entropy

In this riveting, insightful treatise, Michael J. Panzner takes the reader on an incredible adventure exploring the present entropy (‘Presentropy’) engulfing our globe.  The term ‘entropy’ is derived from the Greek and suggests a “turning towards” or confronting the degree of disorder in a system. As Panzner writes: “A look back in time indicates that when a true sea change is in the air, numerous warning signs are apparent beforehand, especially to those who are willing to open their eyes and asses the facts in the cold light of day” (p.182). Well, that’s exactly what Panzner accomplishes, it doesn’t stop there.

I am tired of books that simply shout at the prevailing winds of dissent and discord (including those that possess a clear partisan political ax to grind). “When Giants Fall – An Economic Roadmap For the End of the American Era” is uniquely not “one of those.” It addresses not only the present conundrum but boldly forecasts conditions, conflicts and challenges that we should all anticipate (not simply American citizens by the way – this book deserves a global audience, prompting and a constructive dialogue amongst all concerned).

This book distinctly demands broad audience appeal. It is extremely well written and superbly documented. The subject matter covered includes economic, socio-economic, geopolitical considerations, international relations, national and international security, demographics, energy, natural resources and — how a new reality is upon all of us; a reality whose form and substance have yet to be fully formed.

As Panzner points out, “Calculations depend, of course, on assumptions about the future” (p.128). After laying the groundwork for his prognostications, the author does a masterful job weaving reasonable, yet startling realities that emerge to paint a picture about a very different and perhaps, uniquely foreboding future. Panzner’s capability to characterize the conceptual framework that surrounds concepts, like pressure, equilibrium, and competition for influence all serve to enhance the reader’s appreciation for the legitimacy of the picture Panzner paints.

A phenomenal contribution!!! – A superb addition to your personal library. However, don’t leave it on a shelf when you’ve finished reading. I’m keeping mine handy as I reference Panzner’s prognostications against the new emerging reality that continues to unfold on a daily basis.

Buy one for a friend. They will be thankful to have the opportunity to devour this work.