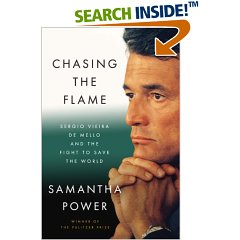 I finished this book over a month ago. It it is unusual for me to take thirty days to review a book. However, this book continues to ricochet through my being. Admittedly, Samantha‘s last book, The Pulitzer Prize winning “A Problem From Hell – America and an Age of Genocide” occupies a prominent place in my personal library. Chasing The Flame – Sergio Vieira De Mello And The Fight To Save The World” has earned the space next to her former book.

Once I began, I couldn’t put Chasing The Flame down. Power has a literary and researcher’s skill that that is unequivocally unique. The documentation and sheer magnitude of the effort are mind-boggling. Why? Why, one may ask would someone take the 4 years it took to write this story?