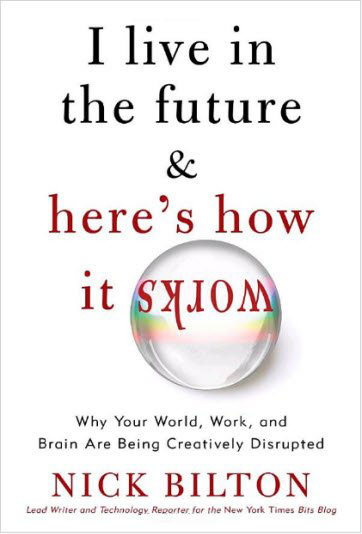 I truly enjoyed this book. Bilton is a practitioner (lead writer for the NY Times Bits blog) as well as a reporter. However, as one begins to read this work, the flavor of a deep-thinking academic begins to evidence itself (Bilton is also an adjunct professor at New York University’s interactive telecommunications program).

Bilton is a gifted story-teller who aptly integrates narratives from his own life and his profession to emphasize the points that many others authors would only be capable of describing in a theoretical sense. Nick Bilton does, in fact, live in the future and this book is a treasure of insights about how it works, and why/how our world is being disrupted in the process.

Bilton’s analysis and commentary on society and technological change, were some of my most treasured takeaways from the book. These include:

“My peers aren’t going to wake up one day and crave newsprint. The world is shifting; ignoring it won’t make it go away.” P. 8

When we adopt a new way of doing something, we also have to give up the old comfortable ways we’re accustomed to, and that kind of change frequently comes with its own anxiety. P.63

“As we’ve seen, throughout history we have tended to dramatize the death of one form of communication when another is being born.” P.63 .

There may be some truth to some of this; we may well be fundamentally different when this is all over. But for the most part, I believe it’s bunk. Just as well-meaning scientists and consumers feared that trains and comic books and television would rot our brains and spoil our minds, I believe many of the skeptics and worrywarts today are missing the bigger picture, the greater value that access to new and faster information is bringing us. For the most part, our brains will adapt in a constructive way to this new online world, just  as we formed communities to help us sort information. Why do I believe this? Because we’ve learned how to do so many things already, including learning how to read. P.136.

A superb read penned by an adroit cultural observer, technology practitioner and journalist – the depth and breadth of which are display throughout the entirety of this work.

Enjoy! I most certainly did. Follow Nick at http://www.NickBilton.com or the Bits Blog at the NY Times.