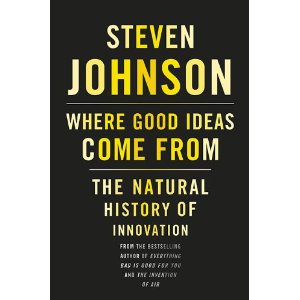 This is THE BEST BOOK I read in 2010. PERIOD. I am pleased to recognize Steven Johnson’s work, Where Good Ideas Come From – The Natural History of Innovation, (Riverhead Books – Published by The Penguin Group New York, NY Copyright © 2010 by Steven Johnson).

In an era when the U.S. requires some creative thinkers to point the way ahead, I urge you and yours to devour this work. This work is timely, a shape-shifter and contains, in my opinion, the type of thinking required for re-evaluating the current foundation, energy and trajectory applicable to individuals, organizations (BOTH public and private sector), entrepreneurs, diplomats, inventors, faith-based communities etc.

What’s the thesis of this work? Listen to Steven Johnson:

“If there is a single maxim that runs through this book’s arguments, it is that we are often better served by connecting ideas than we are by protecting them. Like the free market itself, the case for restricting the flow of innovation has long been buttressed by appeals to the “natural “ order of things. But the truth is, when one looks at innovation in nature and in culture, environments that build walls around good ideas tend to be less innovative in the long run than more open-ended environments. Good ideas may not want to be free, but they do want to connect, fuse, recombine. They want to reinvent themselves by crossing conceptual borders. They want to complete each other as much as they want to compete.” P.22 (emphasis is mine).

The U.S. has always been heralded as the global center for innovation, technological breakthroughs and the quality of a university system that attracts the finest minds from around the world. At present, the U.S. seems to be struggling with a paucity of good ideas and its infrastructure – that has historically produced global admiration (educational achievement, patents, new industries, technologies, strategic partnerships and economic prowess) – has been characterized by a myriad of measures as “in decline.”

This book stirred my patriotic fervor, as well as my competitive and creative juices. It didn’t just stir me up – it somehow rearranged some things for me – at a soul level. It is a uniquely hopeful book – a message of tangible, practical hope for global citizens faced with seemingly insurmountable challenges of survival and daily life.

As Johnson writes, Reading remains an unsurpassed vehicle for the transmission of interesting new ideas and perspectives. P.112

Thus, I am NOT going to litter this review with too many excerpts from Johnson’s work that would encourage you to make a judgment that simply reading a review of it was somehow sufficient. Here’s what happened to me after I read Where Good Ideas Come From – The Natural History of Innovation — I immediately went out and devoured two of Johnson’s previous, acclaimed works The Invention of Air and The Ghost Map.

From time to time, cultures produce thinkers whose ideas are simply essential, timely and (hopefully) infectious. These people and their ideas seem to rise up at times during certain historical epochs when they are desperately needed — and may be deemed counter intuitive to the mainstream thinking that seems to be widely accepted.

As Johnson says in The Ghost Map: “The river of intellectual progress is not defined purely by the steady flow of good ideas begetting better ones; it follows the topography that has been carved out for it by external factors. Sometimes that topography throws up so many barricades that the river backs up for a while.” P. 135

Where Good Ideas Come From – The Natural History of Innovation is aforce thatpierces the barricades that are currently preventing the natural flow of human ingenuity from proceeding as constructively and as freely as it might. This book is inhabited by the essential inertia that is fundamental to our present and our future – individually and collectively.

I can unequivocally declare this work to be The Best Book I read in 2010.

Steven Johnson is the best-selling author of six books on the intersection of science, technology and personal experience. His writings have influenced everything from the way political campaigns use the Internet, to cutting-edge ideas in urban planning, to the battle against 21st-century terrorism. His last book is the Invention Of Air: A Story of Science, Faith, Revolution, and the Birth of America. He is author of the national bestseller, The Ghost Map: The Story Of London’s Most Terrifying Outbreak — and How It Changed Science, Cities, and the Modern World.

His 2005 work, the national bestseller Everything Bad Is Good For You, was one of the most talked about books of 2005. Steven argues that the popular culture we love to hate – TV, movies, video games – are getting better and are making us (and our children) smarter. In addition to his books, Steven is a contributing editor for Wired magazine and a monthly columnist for Discover magazine. He is a Distinguished Writer In Residence at the New York University Department of Journalism. He lectures widely on technological, scientific, and cultural issues, both to corporate and education institutions.

Steven’s argument in Everything Bad Is Good For You builds on brain research he investigated in his previous bestseller Mind Wide Open: Your Brain And The Neuroscience of Everyday Life. In that book, Steven uses his own personality as the test case for describing how the new brain science is yielding new understandings of human personality. Emergence: The Connected Lives of Ants, Brains, Cities and Software was on four prestigious “Best Book of the Year” lists and was named a New York Times Notable Book. It was a finalist for the 2002 Helen Bernstein Award for Excellence in Journalism. Steven’s books have been translated into a dozen different languages.

He was the cofounder and editor-in-chief of FEED, the revolutionary web magazine blending technology, science and culture with a truly innovative interface. Newsweek named him one of the ‘Fifty People Who Matter Most on the Internet.’ In addition to his columns, he’s published in The New York Times, The Wall Street Journal, The Nation, and many other periodicals. He’s also appeared on many high-profile televisions programs, including The Charlie Rose Show, The Daily Show with Jon Stewart, and The News Hour with Jim Lehrer.