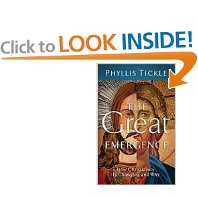 OK…OK…I finished this book – The Great Emergence – How Christianity Is Changing and Why by Phyllis Tickle. Well….

There is absolutely no question that the author is a scholar, has superb writing and analysis skills etc. However, I must have received a dozen emails telling me I “must” read this book “now.” Well after six weeks of completing the reading in my ‘stack’ I did just that. Admittedly, my expectations were very high. I enjoyed the book, particularly from the historical perspective.

However, the hype that raised my expectations to beyond lofty provided the basis for my disappointment. In terms of the subtitle, How Christianity is Changing and Why, I guess I missed that answer and/or illumination. On the final page of the book (163) the author writes, “it is emergents themselves who are going to have to reconsider Emergence Christianity. They must begin now to think with intention about what this new form of the faith is and is to become; because what once was an engaging but innocuous phenomenon no longer is. The cub has grown into the young lion; and now is the hour of his roaring.”

In an article I wrote in 2007, entitled “Take Away The Stone – Shedding Light Inside The Emerging Church,” I wrote: Movements of God’s Spirit have been occurring ad infinitum. However, man’s ability to recognize and participate in them have been, well, problematic. Man attempts to define these movements and the people ascribed to them, through the use of man-made words. We attempt to categorize people into recognizable boxes. Typically, these attempts are guided by discerning people’s beliefs (by what they say), actions (by what they do), places (where they hang out together), experiences (our interaction with them). Man attempts to understand by developing a flavor for these phenomena by relying on the senses of sight, hearing, touch, taste and smell. The history of the Christian faith is distinctly the history of emergence (as Tickle clearly illustrates). Today, there are literally thousands of names for different denominations of what the term Christian originally meant (if there ever actually was just one meaning that was widely understood and accepted – by both insiders and outsiders). So what’s the big deal?

Honestly, I think the “big deal” about this book is as follows:

1. The momentum of the emergent ‘movement’ in North America has been “meowing” throughout 2008. In some sectors, the meow has become a yawn, just like when a kitty takes that one last yawn before it slides off into a nap. Thus, the emergent movement desperately needed a title like this (with a legitimately brilliant woman author/scholar) to awaken the lethargic kitty.

2. The suggestion by Tickle (see quote above from page 163) that it is the “emergents themselves who must reconsider Emergence Christianity” is likely somewhat true, yet it does not give ample recognition to the forces who do not consider themselves emergent (whatever that really is anyway) who are contributing in a myriad of ways to the ongoing changes occuring within the Christian faith, following Jesus and the instituion of the Church in N. America.

This book is primarlily about institutional change in a historical context. The informative value about the vision of the future of the faith is lacking (Ms. Tickle does not portend to be a prophet). Perhaps the title is what skewed my expectations as a reader.

We do not need religion that roars, in my opinion. We need servants that serve…..quietly, bringing a helping hand to a deeply wounded world.  What was served up in The Great Emergence by Phyllis Tickle is a meal that will tickle the palates of academics and intellectuals. For me, and a whole host of others, this book needed more time in the oven and some deliberate reconsideration of the seasoning that was sprinkled on the chapter entitled, “The Way Ahead.”

The presence of a fuzzy little kitty snoozing on the couch in the living room is often overlooked by those running for the exits because the kitchen has caught fire.

Scene: People standing on the sidewalk in front of a buring home: “Hey, anybody see the kitty!”

One thought on “The Great Emergence by Phyllis Tickle”