Johnson, Steven The Invention of Air – A Story of Science, Faith, Revolution, And The Birth of America, Riverhead Books – Published by The Penguin Group New York, NY Copyright © 2008 by Steven Johnson 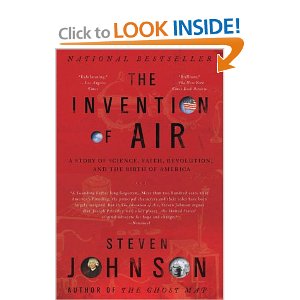 Wow! I mean Wow! What a mind-bender. Here are a few tidbits (any emphasis is mine):

Necessity, may be the mother of invention, but most of the great inventors were blessed with something else: leisure time. p. 53

By why would you study nothingness when there was such a vast supply of stuff to explain? There wasn’t a problem in the nothingness that needed explaining. A cycle of negative reinforcement arose: the lack of a clear problem kept the questions at bay, and the lack of questions left the problems as invisible as the air itself. P. 73

Lunaticks – a  group of intellectual allies with different fields of expertise, sharing insight and inspiration supporting one another emotionally and, at times, financially – and they were uniquely suited for a maverick, cross-disciplinary thinker like Priestley. P. 160.

What’s interesting about Priestley is not that he had a hunch, but rather that he had  the intelligence and the leisure time to let that hunch lurk in the background for thirty years, growing and evolving and connecting with each new milestone in Priestley’s career –  know that epiphanies are a myth of popular science,  ideas don’t just fallout of the sky, or leap out of our subconscious. But we don’t yet recognize how slow in developing most good ideas are, how they often need to remain dormant as intuitive hunches for decades before they flower. Chance favors the prepared mind, and Priestley had been preparing for thirty years. We talk about great ideas using the language of flashes and instant revelation, but most great ideas happen on the scale of generations, not seconds. (Think of the almost glacial pace that characterized Darwin’s “discovery” of natural selection.) Most great ideas grow the way Priestley’s did, starting with some childhood obsession, struggling through an extended adolescence of random collisions and false starts, and finally blooming decades after they first took root. P. 79

Hope that whets your literary whistle…trust me – there’s much more in this book that simply the excerpts represented above. I loved it! You will too.