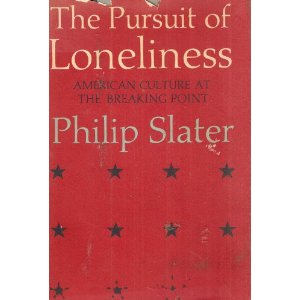 Timeless truths from a classic in sociology. It’s rather amazing to me how prescient Slater truly was. Many of his observations remain (fortunately or unfortunately) accurate today.

One of the major contributions of this work is Slater’s coining of the term “The Toilet Assumption.” He defines the concept as follows:

The Toilet Assumption, for one – the belief that social unpleasantness, once flushed out of sight. ceases to exist-remains cenntra1 to American culture. P. xii

Our ideas about institutionalizing the aged, psychotic, retarded, and infirm are based on a pattern of thought that we might call the Toilet Assumption – the notion that unwanted matter, unwanted difficulties, unwanted complexities and obstacles will disappear if they’re removed from our immediate field of vision.  P. 19

Slater’s characterization of economists still causes many to smile in acknowledgment of his accuracy in the following:

Economists – “But it would be hard to find a field more fraught with mystification than economics, partly because it figures so strongly in political disputes. Most people feel a vague but insistent skepticism about professional economists, the certainty of whose predictive pronouncements varies inversely with their accuracy. Government economists tend to take the position that the public is just naïve, ignorant of the complexities of economic processes. The fact that their own superior knowledge rarely leads them to agree with one another doesn’t seem to distress them. Nor does the fact that our economy has become progressively sicker in response to their ministrations.” P. 169

There’s so much to this book that requires one to ponder, to ask questions, to become befuddled as to why many of the social problems Slater delineates in the 70’s remain unresolved in the second decade of the second millennium.The following is one that rings so true:

There’s probably no more important task ahead of us than finding a way for people to make a living being useful to the community. P. 165