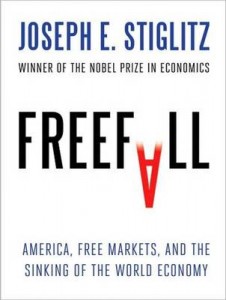 The Humpty Dumpty Perspective on the U.S. Economic Crisis

We all know Humpty Dumpty sat on a wall and subsequently “had a great fall.” What we don’t truly understand is:

a. How ol’ Humpty got in that precarious position in the first place (What was he thinking? What were his assumptions? Why did he go up there anyway?).

Columbia University’s Nobel Prize winning economist, Joseph E. Stiglitz, provides the perspective that other authors who have authored volumes on the U.S. economic crisis have overlooked. It’s a terribly important work that proposes explanations for the questions posed above. It’s truly about ‘freefall’ – “When the world economy went into freefall in 2008, so too did our beliefs. Long-standing views about economics, about America, and about our heroes have also been in freefall.(p.xvi). Well, what might this all mean? Stiglitz is hopeful: “The crisis will, I hope, lead to changes in the realm of policies and in the realm of ideas.” (p.xiii).

From Stiglitz’ perspective, “This book is about a battle of ideas, about the ideas that led to the failed policies that precipitated the crisis and about the lessons that we take away from it. In time, every crisis ends. But no crisis, especially one of this severity, passes without leaving a legacy. “(p.xii).

It is distinctly a crisis of our own creation, as Stiglitz says: The system that failed so miserably didn’t just happen. It was created. Indeed, many worked hard-and Spent good money-to ensure that it took the shape that it did. (P. xxiv.).

According to Stiglitz, the crisis is evidence that the marketplace of ideas failed us (particularly as this term relates to ‘herd instinct’): “The marketplace for ideas is no more perfect than the marketplace for products, capital, and labor. The best ideas do not always prevail, at least in the short run. But the good news is that while the nonsense 0£ perfect markets may have predominated in, certain parts of the economics profession, some scholars were trying to understand how markets actually worked. Their ideas are there, now, to be used by those who wish to construct a more stable, prosperous, and equitable economy.” (P. 274).

The crisis pointed out the central role of the “human element” that remains so dramatically misunderstood in economic behavior: “But the central bankers were, in a sense, right: no one with credibility in their circle challenged the prevailing view, but there was a tautology: no one challenging the prevailing view would be treated as credible. Sharing similar views was part of being socially and intellectually acceptable.” (p. 253) — a terrible cost to pay for ignoring the voices of dissent, in favor of a perceived “socially acceptable” policy position.

Now what? Stiglitz is clear: “The old rules, whether they worked well in the past, are not the right rules for the twenty-first century.” (P. 207)…the final parts of this volume provide specific examples of what the authors suggests.

Finally, one sentence from Stiglitz really caught my attention. He writes, “Trust is the grease that makes society function.” (P. 289). “Freefall” is really all about the process of how the marketplace of ideas ‘greased trust’ throughout the entirety of our economic system, facilitating our fall, and what we might approach putting the pieces back together again.

Needless to say, the latter is hardly a completed process and/or one where the marketplace of ideas is moving toward consensus. Will we be more successful than “all the King’s horses and all the King’s men?”

Imagine not having your head attached to your shoulders correctly…

One thought on “Freefall by Joseph Stiglitz”