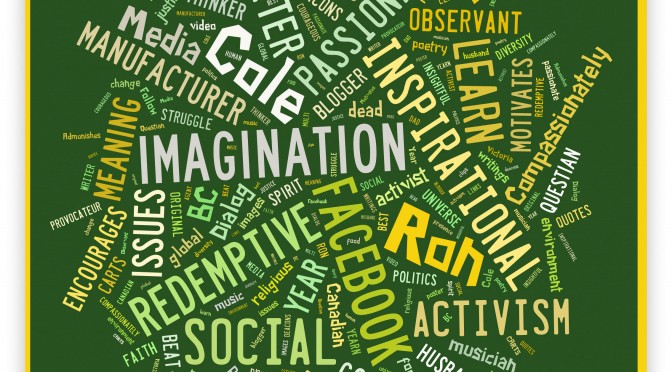 It’s time for my annual award for the 2015 Social Media Meaning Manufacturer of the Year. It’s simply a way for me to recognize someone whose social media presence and posts consistently challenge me throughout the year – and make a positive deposit in my life. This particular 2015 Award Winner’s  posts grow me as a person. The web and it innumerable platforms can numb the mind of the billions that regularly consume its fare each and every day. Perhaps, you might friend the person I have selected for my 2015 award on Facebook and begin to digest his posts on a daily basis for your 2016. Trust me, you won’t be disappointed.

Ron Cole of Victoria, British Columbia Canada is my 2015 Award Winner. Ron is retired, dad, husband, writer, thinker, activist, Questian, musician, blogger and passionate poster on Facebook whose content can be characterized as:
Socially
Observant,
Compassionately
Inspirational,
Admonishes
Learning
Motivates &
Encourages
Dialog,
Invigorates
Activism.
The subject matter of Ron’s posts include global issues, the human spirit, multi-faith religious issues, the environment, food, struggle, politics, social justice, activism, and the universe in which we live. Several years ago, Ron coined the term “the redemptive imagination” – a core concept that inhabits his life and the refreshing variety represented in his posts – sharing poetry, music, quotes, images, original writings, links and video clips.
Ron observes things many overlook, from his perch on an island in northwestern Canada. He is one of the few “magnates of the mystery” that inhabit the world wide web. He is genetically curious and distinctly appreciates the questions versus the certainties in life. He is a consistent, persuasive advocate for “the least of these.” Ron works at his Facebook posts – he shares what is meaningful to him in hopes that you will be similarly impacted.
You can find Ron on Facebook here: https://www.facebook.com/ron.cole.908?fref=ts –
You can email Ron at labmanster@gmail.com
As part of your start to 2016, send Ron a friend request on Facebook and begin to follow him. Enjoy the journey in 2016 with Ron Cole…trust me – you will be glad you did. Expect to be inspired, to grow, learn, be challenged, become perplexed, awed, entertained and begin a journey with a man who will lead you into an understanding of what living life with a redemptive imagination really means. 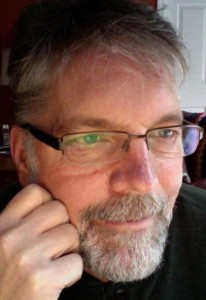 May 2016 bring change to the habits you may have unwittingly developed in 2015…Make following Ron Cole on Facebook a new habit in 2016. You’ll be glad you did. To journey with Ron is to “move beyond” the mind numbing, routine content most folks become seduced into consuming – primarily on Facebook. Change that…change…change for the better in 2016 with Ron Cole.
Thank you Mr. Cole. Congratulations from ALL of us!
Share this...