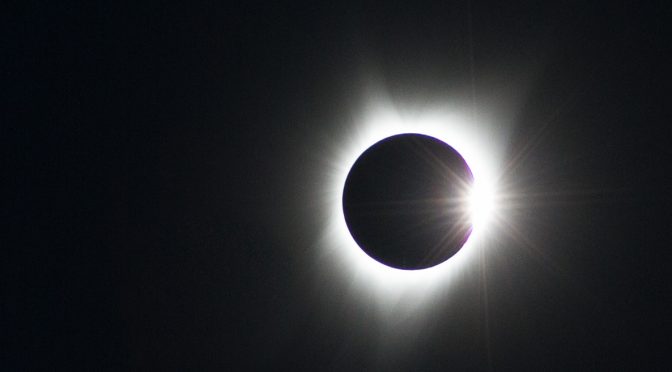 Here are my thoughts following the August 21, 2017 Solar Eclipse that visited the Central Oregon region this past weekend.

This writing was published as a Letter to the Editor in the Redmond Spokesman on Wednesday 9/30/2017 and the Bend Bulletin on Sunday September 3, 2017 (common ownership of the two newspapers)…

Well, it’s over. The path of totality crossed the skies of Central Oregon.


A Redmond church had a sign out front that welcomed all to “Come worship with us Sunday at 10 am.” This sign was behind two large white barricades and some cones that blocked the ​two ​entrances to the parking lot with a sign attached that stated boldly “NO ECLIPSE PARKING!” Redmond had signs in front of the dog park in the Spud Bowl declaring “No Camping.” Yet, cheezy signs for the Redmond Brewfest were prominently displayed at the Highway 97 entrances to Redmond during eclipse weekend.

Local governments ​ and  their departments ​and personnel ​frantically prepared for the onslaught in the weeks prior to the eclipse. Public officials made statements that the “estimates” for the influx of eclipse observers into Central Oregon could be between 300,000 and 3 million visitors. Stores and restaurants stocked up accordingly. Gas lines and shortages were touted ​ (they never happened)​. Public safety agencies staffed up. Garbage collection companies advanced their schedules for garbage pick-up in Redmond anticipating traffic clogged roads on Monday. Redmond City Hall was locked on Monday with some staff inside carrying out their duties. Many companies and public agencies either closed or recommended clients/customers arrange their schedules to avoid Monday.

What happened? Well, the hype played out as just that…hype. ​Now we have overstocked stores and restaurants. The anticipated Armageddon with the estimated human migration to Central Oregon simply didn’t happen. The fear factor that spurred much of the advance preparation was just that…fear.

I wonder what the ​actual ​cost ​s incurred in the Tri-County area and major cities will come in at ​for all ​this defensive preparation? ​Perhaps there are lessons to be learned from this non-event in Central ​O​regon. Here are a few that come to mind:

1. Predicting an influx of visitors for a major once-in-a-lifetime event is a difficult task. However, the source of the estimates and the process used to derive the same need to be re-evaluated.
2. Central Oregon has a cultural history ​of succumbing to hysteria and speculation. This is particularly true for the estimated economic impacts…particularly perceived, prospective positive ones.
3. The fear factor that served to guide local governments to prepare defensively is understandable – and laudable. Public safety requires the same. However, this preparation could also have been infused with some creative, offensive, positive outreach to create a vastly more welcoming environment for visitors to our region.
Perhaps our local elected officials might pause and reconsider what we can lean from the Apoc-Eclipse of 2017, share those with the public, and become more measured, and even-keeled in their preparation for the next major event that will descend upon the region.
My fear is we won’t learn some of the important lessons the shadow of the 2017 Eclipse has left us with. Such is fear. My hope is we might embrace a learning opportunity here, that will benefit all concerned in the future. Such is hope – the antithesis of fear.
This writing was published as a Letter to the Editor in the Redmond Spokesman on Wednesday 9/30/2017 and the Bend Bulletin on Sunday September 3, 2017 (common ownership of the two newspapers)…
Bill Dahl
Redmond, Oregon
Share this...