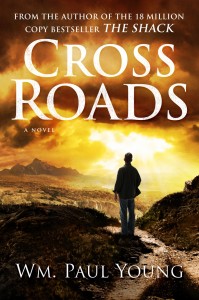 The ABOVE Cover Image for this book has not been finalized yet.

NOBODY…NOBODY can write about pain and the space between the unimaginable and unconscionable wounds inflicted during life on earth – and the reality of an ever-present loving, grace-filled, redemptive, triune God like Wm. (Paul ) Young. NOBODY…PERIOD!!!

On September 7, 2007 I wrote a review on Amazon – for a book entitled “The Shack – Where Tragedy Meets Eternity” — “an odd title,” I thought to myself – before I began reading.  I had never met the author and had NOT requested a review galley. I read EVERY word on EVERY page. The story – from a character and plot development standpoint – was accretive….you couldn’t jump ahead or go to the conclusion. The story changed my life and introduced me to a dear man, William P. Young….along with a few dozen other folks. The book has sold over 18 million copies and is translated into a myriad of languages.

The author sent me the unpublished manuscript for his new novel Cross Roads – available on November 13, 2012 (Hachette Book Group New York, NY). I finished it in a day…well 8 hours of reading anyway…I savored this book!

I am required to be restrained here: Yes, I have the written authorization from the author to write this review. However, based upon the nature of Paul Young’s new novel Cross Roads, I have agreed to write this piece, without revealing either plot or character(s) – my suggestion – not his. Why?

Other than the obvious (release date is November 13, 2012 and the publisher desires a coordinated approach to pre-launch marketing) — Cross Roads, like The Shack, is a product of the uniquely imaginative mind of Wm. P. (Paul) Young. I have identified twelve, concrete things to share with prospective readers based upon these mutually agreeable guidelines. Here’s my take on Cross Roads:

As I wrote in my review of The Shack in September 2007, Cross Roads deserves the same words:

The Best Work of Fiction I Have Read in Years!

BUY THIS BOOK!! Twelve of them.

You’re going to yearn to cross roads to share this gift with others.

(4)   Butler-Bass, Diana Christianity After Religion – The End of Church and the Birth of a New Spiritual Awakening, Harper-One – An Imprint of HarperCollinsPublishers, Copyright © 2012 by Diana Butler-Bass. P. 232.

5 thoughts on “Cross Roads – A Novel By William P. (Paul) Young – A Review by Bill Dahl”