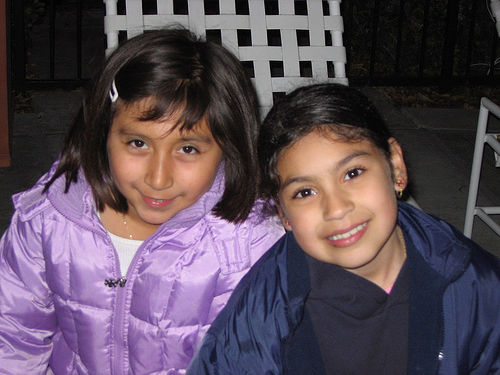 Within the Womb of The U.S. Immigration Policy Reform Debate

“Adoption NOT Abortion” screamed the intensely illuminated red billboard against the black darkness of a Colorado night. Who says you can’t be startled out of a profound state of travel exhaustion while seated in the back of an empty shuttle bus on the way to your hotel?

The shock of it all sent my mind whirling through the relationship between the arguments supporting the right to life v. right to choose debate, and the current national dialogue concerning U.S. immigration policy reform. Yeah, I know. I don’t understand why my brain works like that either. Here’s what I’ve come up with:

Divine creation: Illegal immigrants and any human fetus are Divinely created. The left might disagree with the right on this.

Equal value: Both the fetus and the illegal immigrant are of equal value in the eyes of our Creator. I guess the left and the right may have some trouble with this one.

Legality: Illegal acts create human fetuses and illegal immigrants alike. Some fetuses are created by a criminal act (rape, incest and statutory rape). Undocumented immigrants residing in the U.S. have either crossed our borders illegally, or have illegally extended their stay here beyond the date of their visa expiration. There appears to be a unanimous consensus on this point.

Right to Choose: The question about whether a human being has the right to choose to abort a Divinely created human being, no matter how it was created (legally, or otherwise) is a central issue. The political right would say that there is no choice…the fetus must be treated as a Divinely created child of God. The left takes the position that the womb within which the fetus resides is the party empowered to choose. As it relates to the choice of dealing with the illegal immigrant, it appears the left and right have reversed their respective right to choose positions on this one.

Consent: Pregnancy can occur with, or without consent. Consensual or otherwise, the political right says: “There is no choice. We must embrace the Divinely created.” Those on the left maintain that the owner of the womb possesses the choice. We can all agree illegal immigration is not consensual between the parties. Yet, once again, it appears the left and right have swapped positions again on the consent issue when you substitute an illegal immigrant for a fetus.

The “choice” becomes one of abortion (exterminating the Divinely created), or embracing the pregnant reality with the only choice of compassion that our Creator expects (adoption). Whether the pregnancy is accidental, unplanned, unwanted, inconvenient, costly or burdensome is immaterial to the position supported by the political right. Whether one has been impregnated by a lover, acquaintance or a stranger is also irrelevant for those on the right.

Here’s how it all shakes out in a tabular presentation:

It is a tragedy that the principles that under gird the position of the right and the left on the abortion v. adoption issue are somehow reversed when those same principles are illuminated against the backdrop of the ongoing U.S. immigration policy reform dialogue. We seem to have “flip-flopped.” The present state of the immigration policy reform debate is focused on birth control; preventing any unwanted future pregnancies from occurring. For some reason, the elements that comprise the present policy pill have lost their effectiveness (It really hasn’t worked for years. Don’t tell anybody. Neither party in the U.S. Congress is courageous or dumb enough to take the responsibility for this failure. At this time, I’m not sure we’re currently willing to risk the cost of creating a legitimate solution either). The condom policies we have relied upon for protection are porous.

Birth control issues aside, how long will we continue to be in a state of denial, flip-flopping over the right to life issue for those illegal immigrants residing within our nation’s bulging belly?

We’re pregnant America! It’s too late for chastity belt considerations. The outcome of the present immigration policy reform debate in The U.S. is an opportunity to demonstrate the character of this nation to the world family. Is it the children of the present reality or the parent-nation who must reform? Will we embrace them through adoption or abort them?

How shall we choose?