An Accounting of a Uniquely American Conversation – or What’s Boiling After Bin Laden? 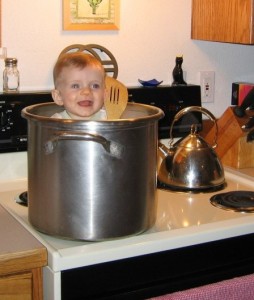 Mark and Margaret – a typical American couple – Married for over 20 years, in their late 50’s early 60’s. They have a mortgage and bills and kids and grandkids. They’re seated in their living room in mainstream America. Here’s their conversation after watching the evening news.

Mark to Margaret: “Well, they finally got Bin Laden.”

Margaret: “Yes – And it’s time to move on with America’s other unfinished business.”

Margaret: “The United States had a housing bubble. When that bubble broke and housing prices fell from their stratospheric levels, more and more homeowners found themselves “underwater.” They owed more on their mortgages than what their homes were valued. As they lost their homes, many also lost their life savings and their dreams for a future-a college education for their children, a retirement in comfort. Americans had, in a sense, been living in a dream.”[1]

Mark: You’re right Margaret. It’s now our nightmare. “Today, the major controversy is over “marking to market:” reporting the value of a firm’s assets on its balance sheet at its current market value.”[2]

Margaret: “Mark, are you telling me those banks wrote their mortgages down to market – without reducing the amount of the mortgage due from us, and others like us?”

Mark: That’s exactly right Margaret. “In the current crisis, moving away from mark-to-market accounting has had a particular adverse effect: it discourages banks from restructuring mortgages, delaying the financial restructuring the economy needs so badly.”[3]

Margaret: “There is no construct more important in American political discourse than the “middle class.”[4] We’ve been smashed in this downturn Mark! The American middle class continues to garner the brunt of the unfinished business.

Mark: “You’re right Margaret – it’s all lip service.” “In social terms, homeowners had at least as valid a claim to public aid as did Wall Street investors.”[5]

Margaret: What’s we do wrong Mark? We’ve become collateral damage by virtue of the systemic failure in this meltdown. We’re the losers. “The losers are disproportionately those people who have prudently been staying out of the housing market bubble.” [6]

Mark: Those folks are absolutely right who’ve said: “Every plan we’ve heard from Treasury amounts to the same thing – an attempt to socialize the losses while privatizing the gains.”[7]

Margaret: Why doesn’t the U.S. Congress get it? “The balance sheet problems into which people fall if their homes lose value are purely financial losses. But they can be converted into substantial real losses to the economy if they are allowed to destroy public confidence.”[8] And that’s what’s happened – American middle class mortgage holders like us, have been left with huge craters in our financial affairs.

Mark: Yep – We live in “a great nation lost its financial mind.”[9] Maybe Congress will turn its attention to addressing this issue Margaret. Sounds like that’s what your unfinished business is referring to.

Margaret: That’s correct. It’s not like reasonable folks like us didn’t see this coming. “All the red lights were blinking in the run-up to the crisis. But until the “accident,” many financial leaders in the United States – and indeed, many academics – were still arguing that “this time is different.”[10]

Mark: Margaret – here’s my concern: “Put simply, a homeowner with little or no equity has little or no reason to maintain his/her obligations.”[11] How can the American economy recover if middle class mortgage holders are drowning in underwater mortgages?

Margaret: “How much inequality can be tolerated? When bets go sour and the economy nosedives, who gets bailed out and who are left to fend for themselves? At what point does an economy imperil itself politically, as large numbers conclude that the game is rigged against them? Most fundamentally, what and whom is an economy for?”[12]

Mark: That’s right Margaret! The game is rigged against the American middle class. “Capitalism works only when institutions are forced to absorb the consequences of the risks that they take on. When banks can pocket the upside while spreading the cost of their failures, failure is almost certain.”[13]

Margaret: “Seems like the U.S. Congress has come down with a bad case of amnesia. “In place of the magical thinking that dominated Wall Street in the years leading up to the near collapse of the financial market had arisen a kind of willful amnesia.”[14]

Mark: The banks got billions in bailouts[15] while the American middle class mortgaged holder remains mired in the unthinkable! This isn’t the American Dream – it’s an ongoing nightmare we wake up to each and every day.

Margaret: Yes, but that’s not the half of it. “The loss of some $7 trillion in household wealth is an albatross around the neck of the economy (emphasis is mine). This dour effect is clipping a robust recovery. Millions who have little or negative home equity are shackled to houses they can’t sell and a debt burden that keeps them from moving ahead. They can’t save, either, although they desperately need to boost their cash reserves.” [16] Like I said, this is the real unfinished business Mark.

Mark: Unfortunately Margaret, America continues to suffer from a “colossal failure of imagination.”[17]

Mark: I wonder if the U.S. Congress truly appreciates the reality that “markets can remain irrational longer than you can remain solvent.”[19]

Margaret: Well Mark, I remain quite concerned and somewhat dismayed regarding the absence of any tangible help to the American middle class mortgage holder. Don’t our elected officials realize that, “To understand how economies work and how we can manage them and prosper, we must pay attention to the thought patterns that animate people’s ideas and feelings, their animal spirits. We will never really understand important economic events unless we confront the fact that their causes are largely mental in nature.”[20]

Mark: There’s nothing mental about the amount of our mortgage and the current value of our home Margaret. “Our ignorance and our false beliefs are likely just to make our circumstances worse.” [21]

Margaret: This is bullshit! Our elected officials have absolutely no appreciation where we middle class Americans live! “Bullshit is unavoidable whenever circumstances require someone to talk without knowing what he is talking about. Thus the production of bullshit is stimulated whenever a person’s obligations or opportunities to speak about some topic exceed his knowledge of the facts that are relevant to that topic. This discrepancy is common in public life, where people are frequently impelled whether by their own propensities or by the demands of others-to speak extensively about matters of which they are to some degree ignorant.” [22]

Mark: That’s my wife! This is our life! – Maybe now the U.S. Government will turn their attention to addressing the terror of the American middle class mortgage holders who remain underwater…

Margaret: I feel like we’re being slowly boiled in a pot on the stove…..

[6] Shiller, Robert J. The Subprime Solution – How Today’s Global Financial Crisis Happened and What to Do About It, Princeton University Press, Princeton, New Jersey Copyright © 2008 by Robert J. Shiller. Pp. 92-93.

[11] McLean, Bethany & Nocera, Joe ALL THE DEVILS ARE HERE – The Hidden History of the Financial Crisis, The Penguin Group New York, NY Copyright © 2010 by Bethany McLean and Joe Nocera. p.92.

[14] McGee, Susan Chasing Goldman Sachs – How The Masters of the Universe Melted Wall Street Down … and Why They’ll Take Us to The Bring Again, Crown Business New York, NY Copyright © 2010 by Suzanne McGee – reacting to CEO of Citigroup –  Vikram Pandit – that “the write-down on troubled assets may be largely behind us.” P. 310

[15] Farrell, Greg Crash of the Titans – Greed, Hubris, The Fall of Merrill Lynch, and the Near-Collapse of Bank of America, Crown Business, New York, NY Copyright © 2010 by Greg Farrell, p. 417.

[17] Wessel, David In Fed We Trust – Ben Bernanke’s War on the Great Panic – How The Federal Reserve Became The Fourth Branch of Government, Crown Business – An Imprint of the Crown Publishing Group, a division of Random House, Inc. NY, NY Copyright © 2009 by David Wessel, p. 4.

Bill Dahl is a freelance writer from Oregon. He blogs at http://www.BillDahl.net.