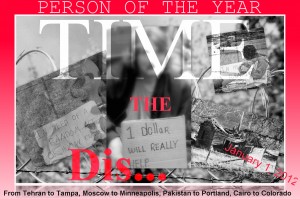 Image above by Bill Dahl – All Rights Reserved.

What Time Is It?

TIME MAGAZINE got it wrong…terribly wrong. On December 14, 2011 TIME announced their Person of the Year for 2011 as “The Protester.” Their cover image is below: 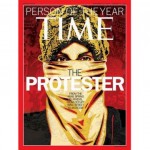 Well, it seems to make sense on the surface and looks good too. Yet, there’s something that TIME missed – something beneath and beyond the faces, voices and actions of the protesters – that has been beamed incessantly into the global consciousness during 2011 by every media outlet that could connect to the web. Other media outlets have suggested that “If you protested in 2011 for ANYTHING at all, then YOU are TIME Magazine’s “Person of the Year.” — REALLY?

Here’s what TIME dismissed that I discovered. I refer to it as “THE Dis…” – My Person of The Year for 2011. Discretely buried beneath the image of The Protester one discovers a pervasive sentiment that involves a population far larger than those who “protested in 2011 for ANYTHING at all.”

THE Dis… include the disenchanted, the discouraged, the disillusioned, the disturbed the discontented, the disdainful, the disheartened. THE Dis… includes those who were disengaged from any form of active protest yet, experienced a degree of disgust and disappointment at the disintegration of expectations that they had learned to rely upon for certainty, stability, security and serenity. THE Dis… may not have occupied anything tangible….they may or may not have been participants in the encampments, and the public discussions or the disorder.  Yet, they were/remain dismayed. Not that they were disinterested or dismissive of the disorienting tremors that seemed to displace what one thought one knew. During 2011, disruption, in every sense of the word, seemed to display itself in duration, forms and degrees that displaced hope, trust and confidence. 2011 was a time period when distrust seems to have achieved new levels of dispersion.

In his most recent book, The Price of Civilization – Reawakening American Virtue and Prosperity, economist Jeffrey Sachs of Columbia University writes:

“We have become a country of strangers. And that estrangement is accompanied by falling trust. Markets cannot overcome the distrust…No significant economic trend in any part of the world leaves the rest of the world untouched…Without trust, there is little chance for coordinated global actions needed to fight poverty, hunger and disease.” [i] (emphasis is mine)

For THE Dis… 2011 was a year when disillusionment seemed to disburse itself without regard to borders, boundaries or birthright. Sociologist Daniel J. Levinson describes the challenge that was pervasively experienced by THE Dis… during 2011 – and shall, in my opinion, remain our challenge in 2012 and beyond. Levinson describes it in the following:

As he attempts to reappraise his life, a man discovers how much it has been based on illusions, and he is faced with the task of de-illusionment. By this expression I mean a reduction of illusions, a recognition that long held assumptions and beliefs about self and world are not true. This process merits special attention because illusions play so vital a role in our lives throughout the life cycle.”[ii] (emphasis is mine).

During 2011, disorientation became a vastly more common, and perhaps intense, experience for the global citizenry. The task of de-illusionment described by Levinson above is not an event – as he states, it’s distinctly a process. For THE Dis… becoming dislocated or dislodged from the fact that long held assumptions and beliefs about self and world are not true is laden with distress. What do you think of an elected governing body that has a 9% public approval rating? (The U.S. Congress) For far too many in the U.S., 2011 contained an ongoing experience of unemployment, stagnant wages, healthcare coverage and costs, rising energy and food prices, shelter, hunger, the costs for education, and homes that are not worth their current mortgage debt. Does this sound mental, spiritual, economic, disruptive and discombobulating? Is a sense of fairness, confidence, the absence of corruption, and a sense of hope fundamental to the human condition and the effective functioning of a democracy? Well, actually – it’s all of that. These are not illusions – they are indisputable facts of human life. They are matters of the soul for individuals, organizations, movements and a nation.

Economists George Akerloff and Robert Schiller have said that “we must pay attention to the thought patterns that animate people’s ideas and feelings”…..that, even in the arena of important economic events that occur within human civilization  “their causes are largely mental in nature.” [iii]

Yes, My Person of the Year for 2011 is THE Dis… the year when we were all required to confront our respective and collective disenchantment…with others, with institutions, with circumstance and condition – with ourselves. 2011 is a year when the disempowered discovered their tolerance limits, when the disinterested became engaged, when the dismal, global economic conundrum endured, when the disreputable were dislodged, when the discouraged became courageous, when the disheartened became desperate, when the dislocated and dislodged began to come together. A year when untold precious human lives were destroyed – disfigured – even dismembered – in the process.

2011 is the year when the alarm clock went off. The disillusioned began to embrace the truth that only the process of de-illusionment can produce – an awakening – a recognition that long held assumptions and beliefs about self and world are not true.  Did you find yourself dismayed by the discord, dissension, discourse and disruption in 2011? Well, wake up! You have a planet full of company. The sensations of your soul are not dissimilar to those experienced by the world around you.

I’m hopeful that 2011 was simply part of the process of what economist Joseph Schumpeter referred to as creative destruction. Yet, people like to throw that term around without understanding what Schumpeter was really talking about. Schumpeter, as recounted by Thomas K. McCraw of the Harvard Business School, shares the following:

“Destruction, however painful, is the necessary price of creative progress toward a better material life. But the correct sequence is vital: creative innovation first, then the destruction of obstacles that lie in its way.” [iv]

This is my concern for 2012: It’s when we humans destroy as our initial response and assume that the construction will simply appear thereafter – the opposite of Schumpeter’s principle – the result can be catastrophic.[v]

The Dis… as celebrated as it may have been in 2011 – can have unanticipated, destructive consequences. You see, The Dis… can morph. It’s virile and viral nature can endure and replicate into new forms that may continue to plague us. This is particularly true when it morphs into cynicism. As Sachs points out: “When the political and economic situation is as dangerous as it is today, cynicism and loss of time are far more dangerous than they look.”[vi]

History reveals that cynicism is cyclical. I have referred to this phenomenon by creating the term cynclical (sink-li-cal) [vii] Cynicism has properties whereby you always end up in the same place you started. Yet, this phenomenon possesses energy, inertia, and a trajectory; like a whirlpool…round and round and down. Whether you are the originator of cynicism or the recipient of it, it has an energy that negatively impacts all concerned. It maintains the loss of essential balancing reference points and sustains a sense of dizziness essential to preserving the illusion that we cannot make progress; retarding the willingness to expend our energies toward the pursuit of positive possibilities.

If you can relate to my characterization of The Dis… my prayer for you is to consider the implications of how you use your time in 2012 – as productively and constructively as possible. May it be a year for you when innovation precedes destruction. A year when you recognize that your thought patterns are animate – how you think and what you think matters. A year when you accept the process of de-illusionment as an essential aspect of human existence –that long held assumptions and beliefs about self and world are not true. A year when you look back and reflect on 2011, you will seek to muster a renewed sense of trust in both the present and the future. A year when you humbly acknowledge we all have much to learn about change; that “learning how to change requires understanding how we go astray.”[viii]

I will close with a quote from David Brooks:

Think about it…the clock is ticking.

[iv] McCraw, Thomas K. Prophet of Innovation: Joseph Schumpeter and Creative Destruction, The Belknap Press of Harvard University Press, Copyright © 2007 by The President and Fellows of Harvard College, p. 501. Note: Unequivocally, in my opinion, the finest treatment of the life of Schumpeter that one might devour.

[v] Ibid. p. 501 – McCraw uses China’s Cultural Revolution of the 1960’s as his example. “For an entire decade, the mindless destruction of almost everything precluded the creation of almost anything.”