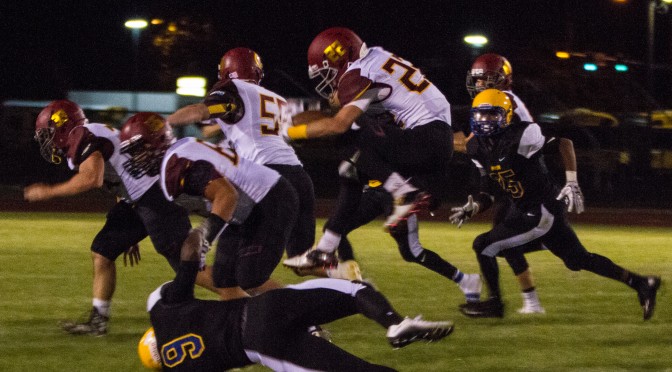 These images were captured Friday evening 9/2/2016 in Redmond, OR USA. The Redmond Panthers played Jefferson from Portland, OR. This was a smash mouth football game!

Bill Dahl is a photographer residing in central Oregon. His photographs have over 2 Million Views on FLICKR and over 3 Million +1’s on Google. Photography Awards are too numerous to mention here – but see the Photography Awards tab at the top of the main page of this site to see a number of them.

I shoot with  Canon Professional Gear – a Canon EOS 7D with a Canon f 2.8 70-200MM telephoto lens and a Canon 2X extender. (shooting over 600 MM – ISO under the lights was 5000 – f5.6 due to 2X telephoto extender…high speed continuous shooting – tripod)…Prints and enlargements are available by contacting me…

I have created two albums from this game vs. Jefferson.

CLICK on one of the two the LINK(s) below – then – click SLIDESHOW (FLICKR Photo Album) or click on the first image you see (Google Photo Album) then click the arrows to move to the next image. These images are VERY high quality and are NOT intended to be viewed on a mobile phone – use a computer monitor, your HDTV, Mac, iPad, notebook or a PC.

For future games – if parents, friends or family want specific PLAYER PROFILE action photos during any future game – I can do that too. GREAT GIFTS!!! CONTACT ME – – – Enlargements and prints are available.

This was a FANTASTIC football game!!!