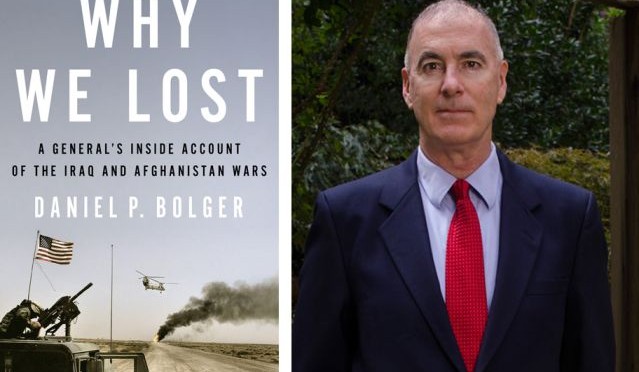 Why We Lost – A General’s Inside Account of the Iraq and Afghanistan Wars – By Daniel P. Bolger

Daniel Bolger is a 35 year veteran in the U.S. Army. He retired in 2013 as a Lt. General. During his career he was awarded five Bronze Stars.

As a U.S. citizen, this book should be required reading for the lay person with no military experience. Why?

Bolger provides unparalleled access into the lives of U.S. military men and women who were engaged in these wars – and provides uniquely, frank and descriptive accounts of the conditions and challenges they encountered. Bolger’s insightful accounts provide the reader with an appreciation of their service, sacrifice, courage and bravery that one simply cannot garner from the mainstream media coverage of the same. You walk away from this book with a deep and renewed sense of appreciation for the bravery and courageous contributions of our men and women who were/are involved in these conflicts.

This book is written in a brutally honest fashion. It is definitely not a muckraking attack on the U.S. military – nor is it a one-sided justification treatise for all things military written by a insider zealot. It is a fair and balanced treatment of every dimension of these conflicts from a participant’s perspective…Bolger’s voice is refreshingly fair, providing uncanny, forthright commentary surrounding the genesis of these wars, the conduct of the wars, and U.S. attempts to extract ourselves from the aftermath of this mayhem.

Finally, Bolger’s insights into “now what” regarding the lessons learned from the wars in Afghanistan and Iraq provide fertile ground for the essential dialog that must take place regarding the role of the U.S. military in the 21st century.

Who is the enemy? This is a central theme throughout the book, and remains the question today embedded in the threats to geo-political stability that continue to inhabit our globe. There are some quotes Why We Lost that should serve to provide the basis for a dialog far too many in the U.S. choose to avoid. Here are a few:

“The war cost the U.S. a lot of money, almost a trillion dollars since September of 2001, about two-thirds for Iraq, the rest for Afghanistan. Just how much permanent damage this did to our country’s economy is hard to determine. War funding certainly elevated the Federal government’s already burgeoning annual deficits and added a few more unwelcome strata to the accreting mountain of long-term debt. Both political parties pointed accusing fingers even as the spending continued. By any measure, fighting a protracted war on the opposite side of the world with a volunteer military and a lot of expensive contractors is no cheap” (p.419).

“We did not understand our enemies. Indeed, drawn into nasty local feuds, we took on too many diverse foes, sometimes confusing opponents with supporters and vice versa. Then we compounded that ignorance by using our conventionally trained military to comb through hostile villages looking for insurgents” (pp.429-430).

“The record to date shows that no senior officers argued for withdrawal. Instead, like Lee at Gettysburg, overly impressed by U.S. military capabilities and our superb volunteers, commander after commander, generals up and down the chain, kept right on going. We trusted our invincible men and women to figure it out and rebuild two shattered Muslim countries and do so under fire from enraged locals” (p. 430).

“Stay the course. Add forces. Pull out. Over time, in both countries, all three approaches were tried. Only the third one, pulling out, worked, and that in the finite sense that it ended U.S. involvement. But it left both friends and foes behind, sowing the seeds for future troubles” (p. 431).

As Dwight Eisenhower warned decades ago, the military-industrial complex is – well – a business. Like any organization, it knows what it knows and does what it does – learning along the way.

However, after reading Daniel Bolger’s Why We Lost – A General’s Inside Account of the Iraq and Afghanistan Wars, I came away with an appreciation for another reality of organizational behavior; inertia.

Inertia is an energy that propels an organism/object/organization ahead, knowing what it knows, doing what it knows how to do. The problem with the energy of inertia is that it possesses an intrinsic characteristic; motion. Once you combine energy and motion and a huge organization begins lumbering downhill into vast and remote terrain – it is terribly difficult to pause, take account of oneself, change direction and rethink what we thought we knew. It is difficult for organisms and organizations to unlearn, reconstitute themselves and become more fit for the challenges that will undoubtedly unfold in the future.

In my mind, the dialog about the role of the U.S. military in the 21st Century is the unequivocal contribution of Daniel Bolger’s Why We Lost – A General’s Inside Account of the Iraq and Afghanistan Wars.

This is a superb contribution for anyone desiring to become more informed about the role and future of the U.S. military…a discussion that we should not avoid or postpone.

BUY THIS BOOK!!! I deeply appreciated General Bolger’s masterpiece. I’m confident you will too. 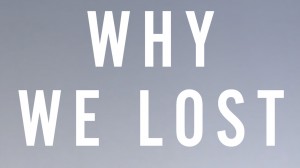