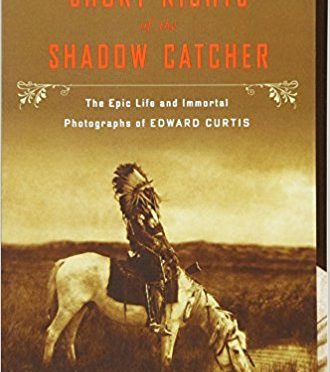 It’s terribly difficult after finishing the 6th in a series of Timothy Egan’s books to declare a favorite. Yet,   Egan’s  Short Nights of the Shadow Catcher: The Epic Life and Immortal Photographs of Edward Curtis – is -well – it broke my heart. 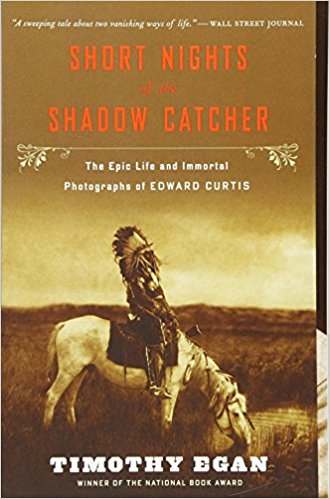 The life and times of “fanatical” (self described) artists like Edward Curtis are rarely full of fulfilling, float you on air happiness.  Yet, his life had many interactions and endorsements by the day’s rich and famous (Teddy Roosevelt and J. Pierpont Morgan to name two).

A man who attempted to capture the remnants of an ever encroaching genocide of the remaining inhabitants of the western tribes of Native Americans is a noble story. And noble is the way Egan tells it. Yet, it leaves you (the trajectory of Curtis’s life) unfulfilled…as the life stories of so many artists do.

How Egan finds these tales and has the uncanny ability to weave story in and around the real-life characters he portrays – is – well – a mysterious literary talent that I’m unsure if even he could describe it adequately. The book, story, prose, research and Egan’s writing just make you salivate for the next page.

This is an unequivocal FIVE STAR work (which I don’t attribute to most literature I read). It is a treasure – just as the life of Edward Curtis and his enduring work was/is. I am really glad I read this book. You will be too.

I am now on to my 7th Egan book in the past three weeks (which I NEVER do); The Immortal Irishman: The Irish Revolutionary Who Became An American Hero (2016).