Farrell, Greg Crash of the Titans – Greed, Hubris, The Fall of Merrill Lynch, and the Near-Collapse of Bank of America, Crown Business, New York, NY Copyright © 2010 by Greg Farrell 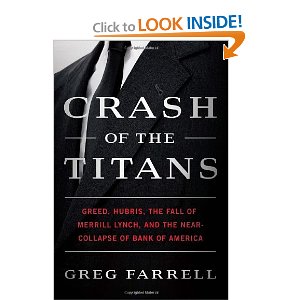 It’s a tough position for another book on the U.S. financial crisis to be released on November 2, 2010 (Crown Business NY, NY) — if you have read as many great books about the crisis this year as I have.

Don’t be fooled. Don’t let the 454 pages of this volume dissuade you from considering this magnificent story from Greg Farrell (correspondent for the Financial Times – BA Harvard and MBA from Columbia).

What Crash of the Titans is, in my opinion, is evidence of simply phenomenal storytelling, supported by a depth and breadth of investigative journalism that is both unique and unparalleled. Farrell is a pro – truly a master story teller. The 454 pages flew by based upon the prowess of Farrell’s ability to keep the reader engaged on a page-turning journey. His character development is amazing. The tension, innuendo and intrigue are simply fantastic and lend to the credibility of this work as a truly unique, non-fiction financial thriller for 2010.

In the spirit of full disclosure, I worked at both NationsBank and BofA during my career as a regional manager of a commercial lending group (during the years when BofA was acquired by NB and adopted the Bank of America brand). I was with NB at the time of the acquisition and stayed on for several years thereafter with the BofA logo on my business card. Farrell’s ability to capture the “culture clash” that occurred during this merger was uncanny – spot on target.

This book is, in my opinion, an eminently fair characterization of the story and the people. Frankly, John Thain did his best – and his performance could not likely be outperformed by comparably capable Wall Street executives who may have been thrust into the situation Mr. Thain was.

Greg Fleming – wherever you are – you are my hero! I’ll work for your team any day. I’m waiting for your call Mr. Fleming.

From the sheer excellence of the story telling, supported by the research and investigative journalism…I rate this work as FIVE STARS.

Buy it. You’ll truly enjoy it. This book ranks right up there with the works of Lowenstein, Michael Lewis and Scott Patterson’s published in 2010.