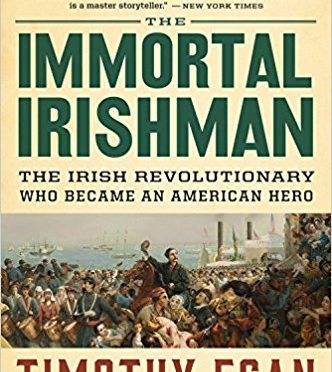 This is the sixth book I have read by Timothy Egan in the past three weeks. Up until this book, I was unable to identify a favorite. Enter –  The Immortal Irishman – now my favorite work of Mr. Egan.

From the days of Irish potato famine, to incarceration on the other side of the Earth in Tasmania, his daring escape from the island prison and relocation to New York City, to leading the Irish Brigade in the Civil War, his appointment as Governor of the Montana Territory, and the circumstances of his suspicious demise – this volume is a panoramic portrayal of the courageous Irish journey – and a man who led them throughout every twist and turn of his amazing life. Egan’s  mastery is on full display in this work. It is simply spellbinding.

This dramatic story simply begs to be replicated on cinema – perhaps – a mini-series vs. a two hour long film – the latter simply would not do justice with the life journey of Thomas Francis Meagher and/or the history of the Irish. I am thinking a multiple season mini-series akin to the recent “Hell on Wheels” production (2011-2016 – AMC) that chronicled the construction of the transcontinental railroad in the U.S.

Luscious history – PERIOD. Spectacular storytelling. Unequivocally unique. Honestly, words fail to express my deep appreciation for this epic contribution to history. The book also provides insights into the enduring attitudes that inhabit the current dialog regarding immigration in the U.S. – and how those attitudes have roots in the distant past of the American story.

If there was a literary rating of six stars (out of five) The Immortal Irishman – The Irish Revolutionary Who Became An American Hero by Timothy Egan is a worthy and distinguished winner.

Buy this book!!! Immerse yourself in this story. Learn. Grow. Enjoy! I most certainly did.

This volume now enjoys a prominent place in my home library – as ALL Egan’s works do.