I just finished Duff McDonald’s “Last Man Standing – The Ascent of Jamie Dimon and JP Morgan Chase.” This book should be required reading for every person in the financial services industry, anyone studying business in college, as well as entrepreneurs, M&A types, accountants, and investors. It’s just a fantasttic, incredible story. 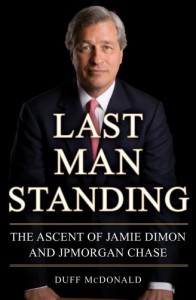 This is a tremendous biography. It is a crucial contribution to the the burgeoning insights into the development of the financial services industry in the U.S. Moreover, it is a story about the development of character – human character – the character of a man (Jamie Dimon) whose life, intelligence, compassion and instincts continue to shape the landscape in America. In many ways, Dimon’s life represents something that is lacking today in U.S. culture — living role models for a younger generation to yearn to become.

The writing by Duff McDonald is balanced, provides the reader with a tremendous sense of Jamie Dimon as a human being, as well as financier/CEO. The writing has a pulse, provides a perspective into both the personal and corporate world – an existence that is often perplexing. The dimensions of struggle, insight, learning and persistence all resonate throughout this non-nonsense non-fiction account of one of America’s true leaders.

The history of the development of the U.S. financial services industry is also quite detailed and anything but boring.

After Alexander Hamilton founded the Bank of New York – purportedly the  first commercial bank in the U.S. in 1794- he had the industry to himself until 1799. About this time, his political rival Aaron Burr started the Bank of Manhattan. A banker named John Thompson started Chase National Bank in 1877. He named it after Salmon P. Chase who’d been President Lincoln’s secretary of the treasury as well as Chief Justice of the U.S. Supreme Court.

J.P. Morgan & Company emerged in what has been referred to as the “gilded age” of American finance. Founded in 1871 by J. Pierpont Morgan and a Philadelphia  banker by the name of Anthony Drexel. (P. 203).

The essence of the book is captured in the following paragraph from author Duff McDonald:

“After years of being considered a glorified number-cruncher who only knew how to cut costs, he was finally acknowledged as a leader who knew how to make a company grow. What’s more, he was recognized s both a creative thinker and a man with the ability to shape the culture not just of his company but also of his industry and even the country itself. It says something about Wall Street today that only a few people command both the respect of their peers and the genuine curiosity of the outside world.” P. 322

Of course the years as Sandy Weill’s protege are well documented and shared frankly, yet with uncanny dignity. However, there are some lessons you can identify in the book that should serve readers requirement for the “truth” about Sandy Weill, as evidenced by the following:

“Weill had acquired the dreaded CEO disease, which made him unable to hear anything but what he wanted to hear.” p.115.

Sandy Weill, on the other hand, is proof that you should never underestimate the man who overestimates himself.” p.130

The Dimon family’s dedication to giving back to community is well documented in the book:

“The Dimons give generously from their family foundation as well as from their personal accounts. Jamie also gives gifts above and beyond annual bonuses to the people with whom he works closely, including his driver. And just like Sandy Weill, he has tried to spread stock ownership through every company he’s run, from top to bottom, driven by a desire to see his colleagues get rich along with him.” P.114

Dimon’s insights into deal making and mergers and acquisitions activityare characterized in the following:

“On a call with analysts in May, he tried, once again, to make explicit his view of acquisition opportunities. “There are three things that have to make sense,” he said. “And they are not in order of importance. One is the business logic. There should be clear business logic to it. The second is the price. Sometimes there is a price at which you cannot make it pay for shareholders. And the third is the ability to execute. You have to be able to see clearly getting done what you need to get done, whether it is management or systems or marketing or culture or something like that. If those things make sense, you can then weigh and balance them. Meaning, if you have exceptional business logic and an easy ability to execute, you could pay a higher price. And conversely, if those things are a little more complex, you want a margin of error by getting a lower it price.” Pp.216-217

The tidbits that Warren Buffet shares about Dimon are priceless: Here’s a couple to chew on:

“Warren Buffett thinks Dimon separated himself from the pack by relying on his own judgment and not becoming slave to the software that tried to simplify all of banking into a mathematical equation. “Too many people overemphasize the power of these statistical models,” he says. “But not Jamie. The CEO of any of these firms has to be the chief risk officer.”

“You have to have somebody that’s got a real fear in them of what can happen in the markets. They have to know financial history. You can’t evaluate risk in sigmas.” – quote from Warren Buffett p.232

Duff refers to sayings of Dimon as Dimonology. These are precious sentences of wisdom, uncommon sense, and the voice of both character and experience. Allow me to share a few here I particularly enjoyed,  to whet your whistle:

“a consistency to performance, rather than someone chasing the flavor of the month,” p. 206

“One of the toughest jobs of the CEO is to look at all the stupid stuff other people are doing and to not do them,” p.214

“Everyone was trying to grow in products we didn’t want to grow in,” he later told a reporter. “So we let them have it.” P.214

“There is one financial commandment that cannot be violated: Do not borrow short to invest long-particularly against ‘illiquid, long-term assets.” “You know what sinks companies?” he asked an audience in late 2008. “Financing illiquid assets short.” P. 230

“Well, sometimes you can’t grow. Sometimes you don’t want to grow. In certain businesses, growth means you either take on bad clients, excess risk, or too much leverage.” P.231

“The issue is not just whether someone has the intellectual capacity to manage it. Someone must also have the desire.” P.325

“Individual units may have volatile results, but the combination is more stable. P.324

“It is no surprise that a lack of corporate intrigue tends to go hand in hand with long-term success.” P. 303

“He actually trusts the people working for him, and trusts, too, that they can learn from their mistakes, as he has learned from his own.” P.304

“When talking of the most important things in his life, he once said, “My family, humanity, my Country, and the world. And way down here is J.P. Morgan.” P.309

“What we aim for is continuous improvement. It’s not like we think we get to a perfect place.” P. 320

Problems don’t age well; denying or hiding them guarantees that they will get worse. Bureaucracy, silos, and politics are the bane of large corporations; they must be combated vigorously and continually.” P.160

No company has ever had much of a future by cutting costs. Success is measured by top and bottom-line growth.” P.169

Review our businesses and what we’re doing well organically. That kind of growth will get you a higher value for your shareholders. By the way M&A is risky and tough, so the discipline is different. You really need to think about the landscape, to ask yourself what’s changing.” Pp.173-174

“I think it’s important that you’re open-minded to other people’s ideas.” P.176

“Many of the previous decade’s mergers had been nothing more than “stacking doughnuts”- the holes in the business that had existed before were still there.” P.181

On large outsourcing contracts –  “We want patriots, not mercenaries,” p. `93

“open architecture” — in which the firm’s brokers were allowed to offer any number of funds, not just those from JPMorgan Chase.” P.194

‘If you admit your mistakes, Dimon’s theory went, you save yourself the hassle of having your critics point them out to you.” P. 196

“Every single risk you’re taking can be broken down to its smallest components and therefore be better understood. All it takes is time and effort.” P.197

As Duff concludes this volume, he shares the following:

“Jamie Dimon has emerged as a moral and managerial compass for both his industry and the country itself.” p. 328 Frankly, after 328 pages of absolutely wonderful investigative journalism, the obvious discipline of a trained biographer, and being immersed in the rare literary talents of a master story-teller (I am referring here to author Duff McDonald) — I unequivocally agree.

To Jamie, Judy, family, colleagues and to Duff McDonald – It was a pleasure and a privilege to have the honor of reading about your lives. My sincere thanks. Your story shall endure with me.