That Used to Be Us: How America Fell Behind in the World It Invented and How We Can Come Back by: 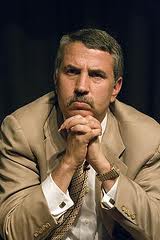 Thomas L. Friedman won the 2002 Pulitzer Prize for commentary, his third Pulitzer for The New York Times. He became the paper’s foreign-affairs columnist in 1995. Previously, he served as chief economic correspondent in the Washington bureau and before that he was the chief White House correspondent. In 2005, Mr. Friedman was elected as a member of the Pulitzer Prize Board.

Michael Mandelbaum is the Christian A. Herter Professor of American Foreign Policy at The Johns Hopkins University School of Advanced International Studies in Washington, D.C. A regular foreign affairs columnist for Newsday, Mandelbaum is the author or co-author of nine books, including The Ideas That Conquered the World: Peace, Democracy, and Free Markets in the Twenty-First Century.

At their own admission,the authors refer to themselves as frustrated optimists – a characterization that is validated throughout the content contained in the book.

“The two of us are not pessimists when it comes to America and its future. We are optimists, but we are also frustrated. We are frustrated optimists. In our view, the two attitudes go together…America is ideally suited to thrive in the tremendously challenging world we are living in. …but we cannot help but be frustrated when we discover how many creative, hard-working, talented Americans feel that our country is not educating the workforce they need, or admitting the energetic immigrants they seek, or investing in the infrastructure they require, or funding the research they envision, or putting in place the intelligent tax laws and incentives that our competitors have installed.” (pp.7-8).

The authors suggest: “One thing we know for sure: The path to a happy ending begins with the awareness that something is wrong, that changes are necessary, and that we the people have to be the agents of those changes.” This sentiment should likely make you conscious of the fact that the authors believe that American politics/government per se, has become a business where money talks and influence is purchased…not for the likes of you and I but for industries and interests who have their own agendas at hand.

Frankly, I didn’t agree with everything the authors were suggesting throughout their book. That’s okay. Independent minded citizens should have that reaction.  The American experiment continues to evolve. Friedman and Mandelbaum are two guys who care deeply about the past, current state, and future of this country — there is absolutely no question about that. This book is truly a platform from which dialog and debate might be launched from, as we seek redefine our trajectory as a nation, communities, citizens and individuals. It is a superb volume to be used as a source document in group discussions – that should lead people to vastly more informed decisions about the actions that might be taken to correct current deficiencies, and awaken “a whole new mind” to the possibilities for our country and our world.

A really Great Book. Devour it.