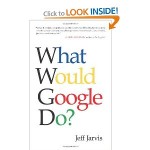 From internet and media guru Jeff Jarvis (see http://Buzzmachine.com) comes a critically important work. The World Economic Forum in  Davos named Jarvis as one of the 100 worldwide media leaders in 2007 and 2008. Jarvis was formerly the founding editor and creator of Entertainment Weekly. In his spare time (?) he is a faculty member in the Graduate School of Journalism at City University of New York.

This is not the typical chronology and/or biographical approach to Google by someone granted access to either the Company or its inner circle ( See Ken Auletta’s “Googled: The End Of The world As We Know It” for that sort of treatment. My review of Auletta’s book is here. ). In the Acknowledgments and Disclosures section on the final page of Jarvis’ book “WWGD” (p.246) he makes his vantage point very clear when he states plainly:

“I am grateful for Google’s existence, its lessons, and its inspiration – not to mention Marissa Mayer’s quotable advice online. But I want to note that I did not seek access to Google for this book because I wanted to judge it and learn from it at a distance. My admiration of Google, then, does not spring from any relationship with the company but from its incredible example.”

This book is really about Google’s worldview and how they apply (have applied) those beliefs, attitudes and values from the company’s genesis, its development, and the initiatives it has (may have) in its sights in the future. Yet, worldviews don’t reside in the “head” of a company – they inhabit (in varying degrees) the soul, mind and spirit of the founders, managers, engineers – each and every employee and stakeholder invested in this enterprise…and guess what…that includes you as well. As Jarvis succinctly summarizes:

“They see a different world than the rest of us and make different decisions as a result, decisions that make no tense under old rules of old industries that are now blown apart thanks to these new ways and new thinkers.” P.4. “Create and manage abundance rather than control scarcity – as ever, that is the Google worldview.“ P. 163

How? How did Google lead us all to the baptismal fount to become unwitting, duly confirmed disciples of their services. Answer? They didn’t. We did it to each other. Listen to Jarvis:

“It is because the single greatest transformative power of the internet and Google has little to do with technology or media or even business. It’s about people and making new connections among them. It all comes back to relationships.” P.22. Today’s web 2.0 method for growth is to forgo paying for marketing and instead create something so great that users distribute it – it goes viral. Pp.31-32. Google distributes itself. It puts its ads on millions of web pages it does not own, earning billions of dollars for those sites and for itself. It offers scores of widgets-boxes of free, constantly updated content or functionality anyone can add to a web site or desktop: everything from weather to cartoons, chat to calendars, sports scores to photos, recipes to games, quotes to coupons. These widgets are filled with other companies’ content; Google merely created the platform to distribute it. Yahoo, AOL, and other content sites should have created such distribution platforms years ago, Cutting themselves up and offering their wealth of content and functionality to others to distribute and build upon. They didn’t think that way. They didn’t think distributed. They wanted to get us to come to them. pp.36-37.

Yep…we led one another to become disciples of Google, based upon our craving for relationships, connectivity and our penchant for sharing with one another.  As Jeff Jarvis writes: “Learn this lesson from Google, which spends next to nothing on advertising. It became the fastest growing company in the history of the world without marketing. It grew thanks to its friends, not through ads.” P.46

The depth and breadth of Jarvis’ insights regarding the current state and future of organization development/entrpreneurship/innovation are too numerous and valuable to attempt to enumerate here. However, the following are a few of my favorites:

You must realize that your crowd – your users, customers, voters, Students, audience, neighbors – is wise. The next questions should be: How do you capture and act on that wisdom? How do you listen? How do you enable them to share their wisdom with each other and with you? How do you help them make you smarter (and why should they bother)? Do you have the systems in place to hear? Do you have the culture in place to act on what you hear?” p. 88

“But the truth about truth is itself counterintuitive: Corrections do not diminish credibility. Corrections enhance credibility. Standing up and admitting your errors makes you more believable; it gives your audience faith that you will right your future wrongs…Being willing to be wrong is a key to innovation.” P. 91.

I absolutely cherished Jarvis’ comments about education. I would be remiss if I didn’t share my three favorites here. Listen to this:

“I imagine a new educational ecology where students may take courses from anywhere and instructors may select any students, where courses are collaborative and public, where creativity is nurtured as Google nurtures it, where making mistakes well is valued over sameness and safety, where education continues long past age 21, where tests and degrees matter less than one’s own portfolio of work, where the gift economy may turn anyone with knowledge into teachers, where the skills of research and reasoning and skepticism are valued over the skills of memorization and calculation, and where universities teach an abundance of knowledge to those who want it rather than manage a scarcity of seats in a class. Pp.210-211

“Would we be forcing young people to go through 18, 16, or even 12 years of school – trying to get them all to think the same way–before they make things? Instead of the perennial call to subject our youth to mandatory national service – how’s that for a way to squander a precious resource? Shouldn’t we instead be helping them find and feed their muses?” P. 212

“Why are we still teaching students to memorize facts when facts are available through search? Memorization is not as vital a discipline as ulfilling curiosity with research and reasoning when students recognize what they don’t know, form questions, seek answers, and learn how to judge them and their sources.” Pp. 215-216.

What are all the “Google’s Rules” Jarvis discusses throughout the book.?Well, I’ve referred to several here but you’re just going to have to immerse yourself in this work just as I did to garner the spoecifics and appropriate appreciation.

Jeff Jarvis’ ending touches on a critically important subject, that you must not rush over. It’s about creativity. It’s poignant:

The internet doesn’t make us more creative. Instead, it enables what we create to be seen, heard, and used. It enables every creator to find a public, the public he or she merits. That takes creation out of the proprietary ands of the supposed creative class. Internet curmudgeons argue that Google and the internet bring society to ruin because they rob the creative class of its financial support and exclusivity: its pedestal. But internet triumphalists, including me, argue that the internet opens up creativity past one-size-fits-all, mass measurements and priestly definitions of quality and lets us not only find what we like but also find people who like what we do. The internet kills the mass, once and for all. With that comes the death of mass economics and mass media. I don’t lament their passing. Pp.239-240.

“There is  an abundance of talent and a limitless will to create, but they have been tamped down by an  educational system that insists on sameness,  starved by a mass economic system that rewarded only a few giants, and discouraged by a critical system that anointed a closed creative class. These enemies of mass creativity turned abundance into scarcity. Google and the internet reversed that flow. Now talent of many descriptions and levels can express itself and grow. We want to create and we want to be generous with our creations. We will get the attention we deserve. That means crap will be ignored. It just depends on your definition crap.” P. 240.

Jeff Jarvis is a talent and a mind to touch base with regularly. This book, his first, is a superb example of the “abundance of talent and a limitless will to create” that Google has had an invisible hand in creating.

Get this book! Savor it. Discuss Jarvis’ observations and insights with others. Allow the invisible hand to have its way with you. You’ll be delighted you did.

5 thoughts on “What Would Google Do? by Jeff Jarvis”