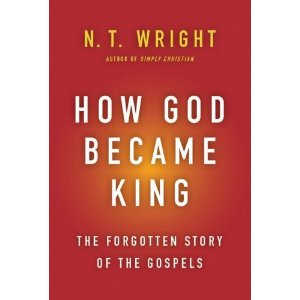 Confession:  I have been a fan of N.T. Wright for some time. I look forward to the opportunity to read his work. (This particular book is available on March 13th 2012 by HarperOne).

N.T. Wright is currently serving as the Chair of New Testament and Early Christianity at the School of Divinity – University of St. Andrews.  He is, for the layperson, one of the few intellectuals focused on the history of Christianity – whose work can be – and should be – tasty fare to the palette of the layperson. Translation: People like me can both understand and appreciate what he is saying – without the need for a seminary degree. (no offense intended to those who may possess or are desirous of the same).

The central thesis of the book is contained in an excerpt from the author toward the middle of the book:

Near the heart of my purpose in this book is to suggest that not only have we misread the gospels, but that we have made them ordinary, have cut them down to size, have allowed them only to peak about the few concerns that happened to occupy our minds already, rather than setting them free to generate an entire world of meaning in all directions, a new world in which we would discover not only new life, but new Vocation. P. 158.

Clearly, one of the outcomes of reading this work is to have a re-invigorated appetite for reading the Gospels – in a new way…a refreshed perspective. As is clear from the title, the author says:

“The story Matthew, Mark, Luke, and John tell is the story of how God became king – in and through Jesus both in his public career and in his death.” (p.175). Wright calls for a refreshing look at these sacred texts. His narrative and analysis do NOT disappoint. He observes: These are not merely antiquarian documents telling a strange story about a powerful, but now long-gone moment of history. They are the moment of sunrise on a new morning, casting a strange glory over the landscape and inviting all readers to wake up, rub the sleep from their eyes, and come out to enjoy the fully dawned day and give themselves to its tasks.” (p.122.) He says:

Yet it is clear to me that none of them have actually taken the gospels seriously as they stand. They have gone to them with the wrong questions and have found answers, of a sort, to those questions. The challenge now is to accept that we have all misunderstood the gospels and to set about finding ways in which we can put this right. It is time for a fresh look at our central texts. (P.58).

Wright uses the metaphor of a quadrophonic stereo system whereby each speaker is out of balance – to provide a structure for his presentation. “One way or another, the music is out of balance. Some parts are almost inaudible, and other parts are all too audible, blasting out l at top volume, distorted in themselves and drowning out every- thing else.” (p.61).

I’ll allow the following excerpts to speak for themselves:

“The first speaker of our quadraphonic sound system to be turned up is this: the four gospels present themselves as the climax of the story of Israel.” (p.65).

“Here, to be sure, is a paradox we meet throughout the New Testament: God acts completely unexpectedly-as he always said he would… what is being fulfilled is precisely the promise of drastic, unexpected, and perhaps even unwelcome judgment and mercy.” (P.75).

“As I said before, it is possible for one truth, overemphasized, to drown out others with which it needs to be balanced and modulated. It is time to listen with a good deal more are to the story the Bible itself tells us about Israel’s God, the world’s creator.” (P.86).

“We find in the very earliest Christian documents that all of these ‘pointed to a strange new reality: that, in Jesus, Israel’s God had become present, had become human, had come to live in the midst of his people, to set up his kingdom, to take upon himself the full horror of their plight, and to bring about his long-awaited new world. (P.95).

The gospels are consciously telling the story of how God’s one time action in Jesus the Messiah ushered in a new world order within which a new way of life was not only possible, but mandatory for Jesus followers. (P. 119).