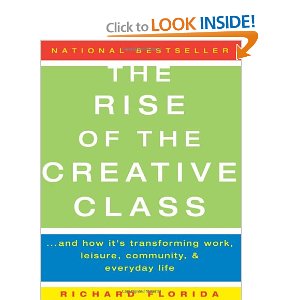 Unequivocally – One of the most important books most folks will NEVER read….I am VERY glad I did. Although published a few years ago (and now superseded by Florida’s new book entitled “The Great Reset: How New Ways of Living and Working Drive Post-Crash Prosperity“), this work will endure for years to come.

The following are some of the more important excerpts that I took away from the reading:

We live in a time of great promise. We have evolved economic and social systems that tap human creativity and make use of it as never before. This In turn creates an unparalleled opportunity to raise our living standards, build a more humane and sustainable economy, and make our lives more complete. But there is no guarantee that this promise will come to fruition-it can just as easily go unfulfilled. Right now in the United States, that’s exactly what’s happening. The transformation we have given rise to stands incomplete. The great dilemma of our time is that having generated such incredible creative potential, we lack the broader social and economic system to fully harness it and put it to use. No one is going do to this for us. It’s up to us – all of us – to complete the transformation to a society that taps and rewards our full creative potential.” P.xiii

The wealth generated by the creative sector is astounding. It accounts for nearly half all wage and salary income in the United States, $ 1.7 trillion dollars, as much as the manufacturing and service sectors combined. P. xiv

Great economic shifts like the one we are going through with them bring massive tensions and disruptions. P. xiv

While there is no magic bullet here, sooner or later some place will figure out how to more fully tap the creative talents of much broader segments of its people-and it will get a huge competitive edge as a result.p. xvii.

The most successful regions welcome all kinds of people. And they offer a range of living choices, from nice suburbs with single-family housing to hip urban districts for the unattached. They have to. Only 23.5 percent of Americans now live in the standard nuclear family with two parents and children at home. Like it or not, more young people are delaying marriage and childbirth. Many are separating or divorcing. Many live in some sort of alternative arrangement. Appealing only to traditional families and excluding or denigrating everyone else may be good propaganda for the culture wars, but as a development strategy, it’s a disaster. p.xviii

This book argues that place is the key economic and social organizing unit of our time. P.xix

Places provide the ecosystems that harness human creativity and turn it into economic value. P. xix.

Places that are open and tolerant have an edge in attracting different kinds bf people and generating new ideas. P.xix

The key is to “squelch the squelchers”-the controlling leaders, micro managers,  and broader structures of social! Control and vertical power-that quash and derail that energy. P. xxiii

Any country that doesn’t keep building its creative strengths-with broad support for creative activities, and with policies that bring more citizens into the creative sector rather than under-employing them-will fall behind. P. xxvi

The next “Silicon Somewhere” p. xxvii

In a curious reversal, instead of people moving to jobs, I was finding that companies were moving to or forming in places that had the skilled people. P. xxvii

History shows that enduring social change occurs not during economic boom times, like the 1920’s or 1990’s, but in periods of crisis and questioning such as the 1930s – and today. The task before us is to build new forms of social cohesion appropriate to the new Creative Age-the old forms don’t work, because they no longer fit the people we’ve become-and from there, to pursue a collective vision of a better and more prosperous future for all. P.xxx

The creative impulse-the attribute that distinguishes us, as humans, from other species-is now being let loose on an unprecedented scale. P.4

“The economic need for creativity has registered itself in the rise of a new :Iass, which I call the Creative Class. Some 38 million Americans, 30 percent of all employed people, belong to this new class. I define the core of the Creative Class to include people in science and engineering, architecture and design, education, arts, music and entertainment, whose economic function is to create new ideas, new technology and/or new creative content. Around the core, the Creative Class also includes a broader group of creative professionals in business and finance, law, health care and related fields. These people engage in complex problem solving that involves a great deal of independent judgment and requires high levels of education or human capital. In addition, all members of the Creative Class whether they are artists or engineers, musicians or computer scientists, writers or entrepreneurs-share a common creative ethos that values creativity, individuality, difference and merit. P. 8.

The Creative Class is the  norm-setting class of our time. But its norms are very different: individuality, self-expression and openness to difference are favored over the homogeneity, conformity and “fitting in” that defined the organizational age.’  P.9

They are fleeing the older working-class strongholds and in many cases avoiding newer but  conservative Sun belt  cities-increasingly opting out of places where tradition is more valued and where the social norms of the organizational age still prevail. In fact, many of these places are being almost entirely abandoned by the Creative Class. P.11

The geographic trends I will describe in this book do not favor the tightly knit old-style communities that are so often celebrated in our songs, stories and sentimental TV commercials. Pp. 11-12

as people of all ages continue to seek new outlets for their creative capacities. P. 14

This transformation is the shift to an economic and social system based on human creativity. Most people would never suppose that changes in our tastes for work, lifestyle and community might be driven by such basic economic changes. I argue that they are. P.15

After reading scores of books and countless articles on today’s  social changes, I have come to the conclusion that much of the time we are locked in a misleading and fruitless debate. The two sides in this debate amount to little more than flip sides of the same coin, opposing mythologies steeped in outdated ideologies, equally short-sighted and misleading. P. 15

Human creativity is multifaceted and multidimensional. It is not limited to technological innovation or new business models. It is not something that can be kept in a box and trotted out when one arrives at the office. Creativity involves distinct kinds of thinking and habits that must be cultivated both in the individual and in the surrounding society. Thus the creative ethos pervades everything from our workplace culture to our values and communities, reshaping the way we see ourselves as economic and social actors-our very identities. P. 22

Yet creativity is not the province of a few select geniuses who can I? away with breaking the mold because they possess superhuman talents. It is a capacity inherent to varying degrees in virtually all people. P. 32

“We are not used to thinking of ideas as economic goods,” writes Romer, “but they are surely the most significant ones that we produce. The only way for us to produce more economic value-and thereby generate economic growth-is to find ever more valuable ways to make use of the objects available to us. P. 36

In the long run, we cannot forget what the fundamental cornerstone of our wealth is. Though useful knowledge may reside in programs or formulas, it does not originate there. It originates with people. The ultimate intellectual property-the one that really replaces land, labor and capital as the most valuable economic resource – is the human creative faculty.  P. 37

Major new systems for harnessing creativity generally evolve from existing ones. The new systems do not necessarily replace or triumph over the old, but they always expand and alter the playing field. They tend to arise when the existing order has begun to reach certain limits-and as they emerge, they of course produce periods of great advance combined with great turbulence. For it is well established that major new economic systems lead to profound changes in work, social organization and geography. P. 56.

Their property-which stems from their creative capacity-is an intangible because it is literally in their heads. P. 68.

In contrast to the many techno-futurists who say the wired and wireless information age has made location and community irrelevant, the creative workers I talk with say they are vitally important. These people insist they need to live in places that offer stimulating, creative environments. P. 95

The open source model reflects two other core values of the Creative Economy: openness to new ideas and meritocracy. P. 138.

“the ability to leverage the community mind” p. 138.

Truly a book you simply MUST read…based upon its pertinence to the persistence of the present predicament the U.S. and the world finds itself in.