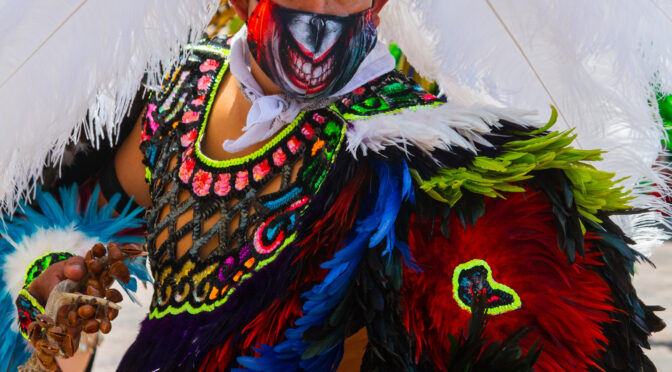 The Fiesta de Los Concheros is one of my many favorite annual events to photograph in Queretaro, Mexico. These images were captured September 13-15th 2021.

The publication de-paseo.com (Dolores Vargas Martínez) recently published a short article explaining the nuances of this celebration. Below is an excerpt from the article:

“In the conchera dance tradition, elements of ancient cultures have been preserved through rite, song and dance, operating in a process of syncretism, which has allowed the heritage of our ancestors to continue to live in Mexico today.

The stage where these dances are performed is the Temple of La Santa Cruz (Cerro de Sangremal) located in the highest part of the Historic Center of the city. In the atrium of the church, hundreds of people from different parts of the country gather every year, who for three days dance to demonstrate their exaltation and veneration of the Holy Cross.

It is a surprising and captivating spectacle for the energy that these faithful overflow, the color of the feathers in their headdresses, the fine and careful details of the costumes and for the faith and devotion that they impress on the dance when the shells exclaim He is God!

THE CEREMONIES.
The tradition of the shellfish is really interesting and something that you will surely want to see up close.

The conchera vigil will start from September 12 from 8:00 p.m. Here offerings will be received by the incense women while praises are sung until twelve on the 13th.  It is then that the church atrium is adorned and the journey of hundreds of shell dancers from different parts of the country begins, who will come down as one great waterfall from Los Arcos (at the height of the Tank), along Avenida Zaragoza until reaching the Temple of the Holy Cross where they will ask God for permission and dance until 10:30 pm. On the 14th the dance will resume all day (In the Temple of the Holy Cross) and in the same way on the 15th, the day the orders are paid. It will end at the edge of 4:00 pm. so that the shells can return to their places of origin.

DANCE.
The dance tables are organized as in the militia, there is a general, captains, malinches, sergeants, ensign and the troop. There is a hierarchical order in order to maintain order and internal organization of the group. The ceremonies are divided into two phases, taking as a reference the principle of duality, called Ometéotl.

The first stage is the so-called “wakefulness”, which represents the energy of the night, the jaguar, mother earth, the feminine principle. In this ceremony the dancer is purified, prepared through song and praise, the touch of instruments such as the shell, the snail, the rattle, the shawm, the preparation and presentation of offerings, the canes and monstrances, covered with flower , to be reborn to the new day purified and clean spiritually and thus appear before the solar vibration. Here comes the second stage that represents the day, the eagle, the solar energy, the masculine principle.

In the dance, the formation of the circle is important, the greeting of the community to the four winds, to the six directions of the universe, which allows the conchero to integrate into the rhythm of life on the planet and the cosmos. The center of the dance circle is considered a sacred place and it is there where the incense burner is placed, the sacred breaststroke with its aromatic essences and the offerings that are carried.

There the energy axis is marked, which reverberates in concentric circles allowing the whole group to become a unit.

Each dance has certain qualities. The movements are related to mathematical accounts, the “sacred geometry”. With your feet you are making a call to mother earth, you are greeting her, with your arms you make a connection with the cosmos and thus each movement has the idea of ​​healing, harmonizing, creating health and abundance. Finally, raising the arms indicates a detachment of the spirit towards God.

THE ATTIRE.
In its origins, the attire of the shells was the same for men and women, but over time it has tended to imitate the characteristic dress of Aztec ladies and gentlemen.

Currently, the basic attire for women is the huipil and the petticoat. The rattle and the bells or bones are a crottal symbol that imitates the sound of the serpent; the feathers of the copolli, plume or crown are a solar symbol, a search for union with the heart of heaven.

The masculine attire consists of the loincloth or maxtle, breastplate, knee pads, bracelets, tilma or cape, sash, shield, in addition to the rattle and the plume.

Undoubtedly, difficult times were lived in the times of the conquest and it was important to preserve wisdom. An excellent way of doing it, which has always been in view of all, has been the ritual festivals. The concheros have known how to preserve traditions that rescue our culture and make us be part of a yesterday that, although sometimes we forget, is ours.

The PHOTO ALBUM is HERE. ENJOY!!!