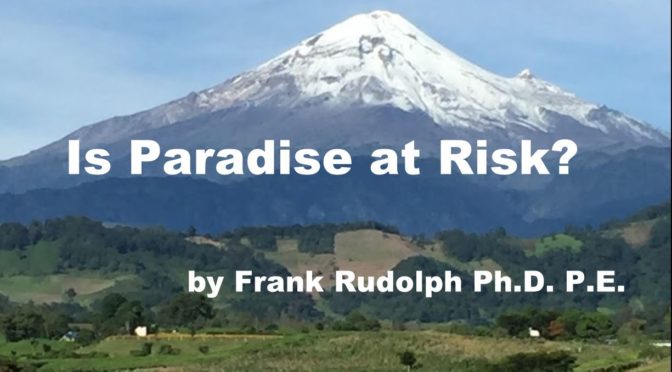 We here in the cloud forest live in what for many of us seems like paradise. But neither the Orizaba Valley nor the Magical City of Orizaba are really magical. We are just fortunate to live where nature and man, at least for the moment, live in relative balance.

Editor’s NOTE: From time to time, I receive superb articles authored by readers. This is one of them. Oftentimes, these articles are inspired by my publications. This particular article is pertinent to the topics of retiring in Mexico, international living, the environment, sustainability and the like. ENJOY the mind and heart of Dr. Frank Rudolph. in this piece. I certainly do.

Pollution is a problem here in the cloud forest as it is in Jalisco and elsewhere. But this area has several mitigating factors that conspire to make it exceptional. For now.

First the cloud itself and the enormous glacier-capped mountain to our northwest are two factors that gift us with a source of water that is very pure and copious. Next, the offspring of that glacier, Rio Jamapa, runs through a region that is still not overpopulated the way parts of Jalisco and (the state of) Mexico are. So even though Rio Jamapa is polluted by the time it passes through Orizaba,  neither the population nor the agribusiness infrastructure are large enough to pollute it to the point that it is toxic (yet). There are places where Rio Jamapa has people enjoying swimming in the river and the water looks clean. But I would not advise drinking it. Now let’s contrast this with the Lerma River. Does anyone know of beaches on that river that still attract swimmers? I would ask the same of Lago de Chapala, too, but I think I already know the answer. 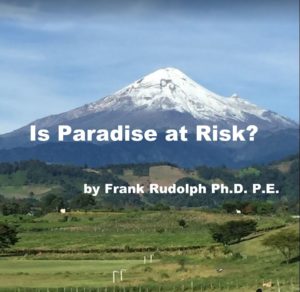 Now let’s look at agriculture. It is still largely organic here in the CF, because the population is relatively sparse and the area has not yet been captured by megalithic agricultural corporations. So the farmers here use heirloom husbandry practices and heirloom seeds. This will change once big agribusinesses take over. The result will be a lower quality of life and less healthy produce at higher prices.

Now consider the cloud itself. It gives the area three things: the glacier atop Pico de Orizaba, which is the very source of all the abundance we enjoy here. It also makes this area very humid (sorry, folks, there ain’t no such thing as a free lunch). This is sometimes unpleasant, if you prefer a cooler, drier climate, but what you see here is what you get!  This cloud does have a silver lining, however. While the copious precipitation gives us often inconvenient periods of cold, clammy winter days and warm sultry sweat-inducing summer days, it also constantly washes the atmosphere and flushes the streets with frequent deluges. At the same time it encourages the growth of mold and mildew, but helps the rivers stay a good deal less polluted than they would be without this abundant rainfall. The result is that, at least for now, this area enjoys a remarkably clean but far from perfect environment. The balance is very fragile. I marveled at the cleanliness of the Rio Jamapa as it rushed turbulently past the Jardín de la Salud, here in Fortín. It looked white enough for a challenging kayak ride and clean enough to encourage me to want to strip down and take a dip. But I was warned by locals that all was not well in paradise: they told me of a poultry abatoire upstream of that spot which dumps untreated waste products into the river. This is a problem, clearly. As long as the flow stays large enough and the number of such commercial abusers low enough, we will continue to have a pretty nice compromise between pristine beauty and commercial success, but it is a fragile balance. Climate change, population increase, and commercial growth are all serious threats that allow this area to remain wonderful for now, probably like much of Jalisco was when I first visited there 30+ years ago. Right now the population of the Orizaba Valley is a bit over 400,000. This sounds pretty crowded to an expat like me. Vermont has only 600,000 people in the whole state, which is much larger than this valley. But compared to Guadalajara, it is very sparse. It will not remain so if population is allowed to grow unchecked.

For now we enjoy a level of freedom from overcrowding and pollution here that makes this area beautiful, clean, and so very seductive. When I walked the streets of Ajijic, I could see the beauty that attracted so many expats to the shore of Chapala. When I saw San Miguel de Allende for the first time, it was love at first sight. I get the appeal of all these wonderful places. But even 30 years ago I witnessed the river running out of SMA that was an open sewer, even then. That sullied my impression and deeply saddened me. It made me think of a beautiful, sultry maiden, who was in truth a courtesan with just a touch of an infection that would someday render her a  ravaged crone without the proper care. Unbridled development is without care.

I have wandered the streets of Fortín and Córdoba, extensively, and of Orizaba less than I’d like. It is easy to fall for Orizaba. Visit the Polyforum, Ojo de Agua, the Iron Palace, and El Centro and you can understand the allure of the Magical City. The grand homes and beautiful landscaping of El Fraccionamiento in Fortín, the mystery of the old Fort and the overwhelming beauty of the everywhere-you-look flowering trees which seem to drape over every wall in the city enticing you into those walls like sirens enticing Ulyses’ sailors, these all tell you in poetic verse why this place is called Fortín de las Flores. The magnetism of El Centro Córdoba, the shock of that first time you turn a corner on your first clear morning in Cordoba and stand awestruck by that first sighting of the majestic peak that towers over the whole area are precious experiences. The occasional quirky statuary of gargantuan bronze hands pointing mysteriously toward some unknown destination (which turns out to be El Centro itself) are intriguing. These and the delightful, friendly, patient, happy people, too are all the things and more that make this place unforgettable.

But visit the East End of Córdoba and the seemingly endless stretches of tired, dirty, commercial streets portend something different. The cane fields look beautiful when they are just before harvest, but the smudges of smoke from the burning of the pre-harvest cane chaff paint the sky a different and disturbing hue. These are inevitable and necessary aspects of a city that we retirees, who are caught between the commercial struggle of our working lives and the beautiful promise of the endless vacation ahead must always remember are necessary and unavoidable. The fragility and ephemeral nature of the delicate balance between the forces of nature and commerce must be managed carefully. The Orizaba Valley is beautiful, but its fragility makes it even more precious. Without proper husbandry, it could be lost forever.

So here’s something to think about. Mexico is in crisis. In some places the crisis is so profound that it may be past a tipping point beyond which it is difficult if not impossible to recover. When some of us point out the problems of Jalisco, we do so out of a sense of love and a concern for paradise lost, not to just criticize, but to warn and counsel. Denial is not an attribute of love and it does not help improve matters, rather it exacerbates negative conditions by encouraging neglect.

I have also learned from locals that Orizaba was not always the Magical Town you see today. I’ve heard that 15 or 20 years ago, it was a disaster that was intentionally turned around by the efforts of some concerned citizens until it became what it is today. Without vigilance, it will not stay so. The fates of places I have loved in the heartland of México are far from sealed. But some of these places are in a critical state, and denial and the desire for unlimited growth without a strong attempt to mitigate the negative influences of growth, commercialism and residential development are just not helpful.

It is time to collaborate. If we persist in being two houses, each of which says our house is better and yours is awful, we will both fail, because we are both delusional. It is just, I contend, that some of us are more in denial than others.

Dr. Rudolph holds a BS in Mechanical Engineering, a MS in Computer Science and a PhD in Electrical and Computer Engineering. He is a registered professional engineer, holds a current 7-12 public educator license in math and physics in NH, is a former adjunct professor at various universities and is currently an Affiliate Professor of Electrical and Computer Engineering at the University of New Hampshire. Dr. Rudolph is a founding partner and development leader for a new medical device company – Byonyks – dedicated to solving the worldwide problem of unnecessary deaths due to End Stage Renal Disease (ESRD) within the next 4 years.”

Born and raised in Mobile, Alabama he has been a long-term resident of New Orleans, St. Louis, New Hampshire, and Vermont.

He is currently semi-retired and is a permanent resident of the Mexican State of Veracruz. More information is available at http://www.docrudolph.com.