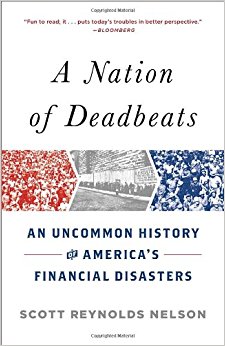 When you read this book you garner a vastly deeper appreciation for the terms scholar, historian, research and story teller. You also are blessed with a unique narrative regarding the history of America’s financial disasters in the nineteenth century. I’ve done quite a bit of reading in this genre – and this book is a MUST READ.

I truly enjoyed this work. Actually, I became immersed in the narrative and learned more than I could have hoped.

This work has encouraged me to continue to “explore the places where maps have failed us…pushing along in the dark.” (p. 254). Yet, the historical evolution of U.S. capitalism that this work recounts, illuminated the absence of pre-existing maps from which to plot the path ahead. However, this work also revealed for me that man, at every juncture, with his seemingly eternal penchant for wealth and power, and organization – emerged, and injected itself at every opportunity.

For me, this book distinctly reinforced the incontrovertible evidence inhabiting the historical record; when you combine man and money, the emergence of mayhem is a matter of fact. Although we currently live in a time where our culture suggests that we know most everything, can control our environments, and predetermine outcomes of socio-economic (and geo-political) policies – I remain a healthy skeptic…particularly as it relates to ALL things economic. Again, this volume is a reminder to me to remain sensitive to the alerts from my “crap detector” (attached to my forehead, swiveling in a 360, 24-7 – and – solar powered). The “smugness” that inhabits our intellectual, social, economic and political discourse today remains, in my opinion, one of our most profound, enduring weaknesses – as a species – particularly as folks continue to espouse rigidly militant “certainty” about issues; past, current and future. I, for one, appreciate those who possess a high regard for questions vs. those who attempt to cram answers down my throat…as the author’s commentary at the end of the book, directed at his colleagues, elicited deeply appreciative smirks from this reader.

Yes, as some of the author’s final remarks in this book indicate, I too have ongoing concerns about the unregulated and mysterious miasma of rogue waves of capital that seemingly slosh between the shores of our globe…outside the cognitive awareness of the ordinary citizen…capital without margin (“margins impose safety”… p. 251), incalculable leverage, incomprehensible risk, and a source of instability whose magnitude and morph I remain acutely concerned with…as inertia continues to thrust us into places where maps are under construction…pushing along in the dark.…to a yet, unknown destination. Yet, the human motivations remain seemingly unchanged.

This particular work is profoundly appreciated by this reader. Thank you so very much Mr. Reynolds.