A splendid contribution – supplying yet another perspective on the genesis and aftermath of the U.S. and global financial crisis. 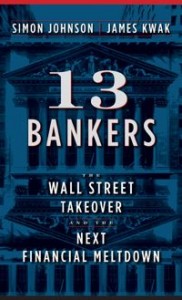 Simon Johnson hails from MIT’s Sloan School of Management (Kurtz Professor of Entrepreneurship) and the Peterson Institute for International Economics. James Kwak is a former software entrepreneur and a  former consultant for McKinsey and Company. They co-author the well regarded economic blog, The Baseline Scenario.

The thesis of the book is summarized in the following:

“Our goal today is to change the conventional wisdom about enormous banks. In the long term, the most effective constraint on the financial sector is public opinion. Today, anyone proposing to end the regulation of pharmaceuticals or to suspend government supervision of nuclear power stations would not be taken seriously. Our democratic system allows the expression of all views, but we filter those views based on a collective assessment of which are sensible and which are not. The best defense against a massive financial crisis is a popular consensus that too big to fail is too big to exist.” P. 221

“Without a privileged inner core of thirteen (or fewer) bankers, the financial sector will be composed of thousands of small companies and dozens or hundreds of medium-to-large companies, including hedge funds and private equity firms. The financial lobby will continue to be strong by virtue of its sheer size, and the community bankers will retain their clout in Congress. But the distortion of the playing field in favor of a small number of mega banks will come to an end.” P.219. Emphasis is mine.

The authors clearly tout the need for systemic financial regulatory reform, particularly as it relates the the largest of the large U.S. financial institutions. They do a superb job of unmasking the myth that “if it’s complex, it must be innovative.” Listen to Johnson and Kwak:

“But there is no law of physics or economics that dictates that all financial innovations are beneficial, simply because someone can be convinced to buy them. The core function of finance is financial inter mediation – moving money from a place where it is not currently needed to a place where it is needed. The key questions for any financial innovation are whether it increases financial inter mediation and whether that is a good thing.” P. 108 (Emphasis is mine)….think about the recent SEC allegations regarding Goldman-Sachs.

Innovation is sometimes based upon herd-instinct and a misplaced trust (in any industry for that matter).  The authors make a case that is difficult to argue with for the largest U.S. financial institutions (13 Bankers) when they declare:

“Never before has so much taxpayer money been dedicated to save an industry from the consequences of its own mistakes. In the ultimate irony, it went to an industry that had insisted for decades that it had no use for the government and would be better off regulating itself-and it was overseen by a group of policymakers who agreed that government should play little role in the financial sector.” P. 164.

Economic bubbles, particularly the one these authors focus on, are based on what turns out to be speculative excesses, irrational exuberance, myths, greed — and the suspension of disbelief, in the face of the deployment of a myriad of so-called financial innovations, that U.S. citizens will pay for for generations to come.

As the authors suggest; “At this crucial juncture in our history, as America emerges from a deep recession into an uncertain economic future.” P. 190. Yet what we do with what we understand has happened requires vastly more deliberation. We should be skeptical of what appear to be “common sense” sound bites and the adrenal rush toward “quick fixes.”

After all, we’re attempting to regulate human behavior aren’t we?