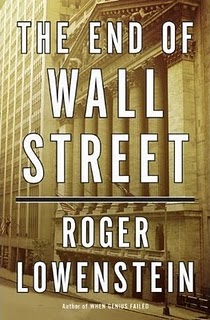 When Genius Failed: The Rise and Fall of Long Term Capital Management by Roger Lowenstein is one of my favorite books. Any author who can write a “Can’t Put It Down – Thriller” about a hedge fund’s origins (LTCM) and then its fall, as  a globally significant financial cog — Well, you just can’t wait for the author’s next work of art. Lowenstein did NOT disappoint this reader with The End of Wall Street (April 2010 – Penguin Press – New York, NY).

An obscure sentence in the book really resonated with me, in terms of Lowenstein’s particular perspective on the U.S. financial crisis. He writes:

The origins, maintenance and subsequent disintegration of this particular U.S. financial crisis was inhabited by, (once again), man’s certainty about the uncertain – to put it plainly. Certainty has consequences, as Lowenstein points out, the intellectual “model” behind this particular bubble was flawed or, as he says, “This was absurd –  because of the arrogance and self delusion embedded in such fine, decimal-point precision.” P. 46.

“What truly failed was the post-industrial model of capitalism. The market’s tools for measuring risk simply did not work.” P. 287.

Yet, more specifically, the characterization of risk morphed into something that had little basis in fact. Lowenstein writes:

“The new finance was flawed because its conception of risk was flawed. The banks modeled future default rates (and everything else) as though history could provide the odds with scientific certainty-as precisely as the odds in dice or cards. But markets, as was observed, are different from games of chance. The cards in history’s deck keep changing.” P. 288

Once again, as was the case in the failure of Long Term Capital Management, the ability to use historical data as the predictive basis of future performance of the  “innovative” financial instruments of the day” proved to be a force that fueled the ongoing deception; Lowenstein characterizes this observation in the following:

“Forecasting is the most hazardous of scientific endeavors. Like meteorologists, modern economists employ computers to project trends from the visible present into a future yet obscure. The reliance on standard (and backward-glancing) models is their great weakness. Any knave can project a continuation of a trend. To call a turn requires judgment-the capacity and courage to read the data and analyze the factors likely to cause a reversal. Very few individuals can do it with any reliability. It is less likely that a group, which naturally strives for safe-seeming consensus, will ever do it.”  p. 150.

In his introductory remarks, Lowenstein suggests that “Capitalism without capital is like a furnace without fuel.” (P. XXV). By the end of the book, one has the distinct appreciation that “fuel without a furnace can burn up your home, your neighborhood, your country and imperil the global financial system.”

Nobody can tell this particular story any better than Roger Lowenstein. After reading House of Cards by William Cohan, When Giants Fall by Michael Panzer, In Fed We Trust by David Wessel, 13 Bankers by Simon Johnson and James Kwak, and Too Big To Fail by Andrew Ross-Sorkin, TheQuants by Scott Patterson, Freefall by Joseph Stiglitz and A Colossal Failure of Common Sense by Lawrence McDonald and Patrick Robinson — Lowenstein rules!

To ALL of the above, I savored your works as well…we are fortunate to have such a group of profoundly talented literary artists whom, each in their own way, have provided a unique and robust perspective on this important historical tragedy.

Something tells me the “last word” has yet to be written. Then again, maybe there isn’t such a thing.