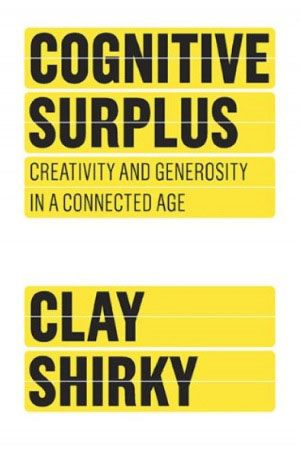 This is unequivocally one of my favorite books published in 2010 (I read about 100 a year). Shirky is on the faculty of the Interactive Telecommunications Program at NYU. He’s written Here Comes Everybody: The Power of Organizing Without Organizations, consulted for a literal Who’s Who in the FORTNE 100, and publishes viewpoints in the NYT, WSJ, The Times (of London) HBR, and Wired.

What the heck is a “cognitive surplus?” Listen to Clay Shirky:

“Imagine treating the free time of the world’s educated citizenry as an aggregate, a kind of cognitive surplus. How big would  that surplus be?” p. 9.

“When you aggregate a lot of something, it behaves in new ways, and our new communications tools are aggregating our individual ability to create and share, at unprecedented levels of more.” P. 25

“The wiring of humanity lets us treat free time as a shared global resource, and lets us design new kinds of participation and sharing that take advantage of that resource. Our cognitive surplus is only potential; it doesn’t mean anything or do anything by itself.” P. 27

“The cognitive surplus, newly forged from previously disconnected islands of time and talent, is just raw material. To get any value out of it, we have to make it mean or do things. We, collectively, aren’t just the source of the surplus; we are also the people designing its use, by our participation and by the things we expect of one another as we wrestle together with our new connectedness.” P. 29.

I don’t know about you, but at this juncture in the book, I was hooked. A fascinating, tangible reality that Shirky goes on to explore, explain, and exhort us toward realizing the power of the possibilities. This isn’t some theoretical mumbo-jumbo, On the contrary, this volumes is filled with practical examples that stimulate the inquiring mind…providing pathways to new forms of action.

In a world where we are constantly being bombarded with images and messages the promote the perception of scarcity (albeit in some cases – a tragic truth), Shirky’s message is one that encourages us to combine the cognitive surplus, social networking and ever-advancing tools of technology to make positive impacts that we have heretofore believed to be beyond us.Shirky’s point is that we currently possess unrealized abundance, that can (and must) be integrated into new ways to approach both current challenges and innumerable opportunities.

I particularly enjoyed a few comments that Shirky made regarding the dichotomy of amateur vs. professional in today’s new reality (think digital media, social networking, You-Tube and the like). Shirky observes:

“The logic of digital media, on the other hand, allows the people formerly known as the audience to create value for one another every day.” Today, the revolution is centered on the shock of the inclusion of amateurs as producers, where we no longer need to ask for help or permission from professionals to say things in public.” P. 52 (emphasis is mine).

“Amateurs are sometimes separated from professionals by skill, but always by motivation; the term itself derives from the Latin amare-“to love.” The essence of amateurism is intrinsic motivation: to be an amateur is to do something for the love of it.” P.82-83 (emphasis is mine).

For many, Shirky’s thesis of a cognitive surplus will come as somewhat of a surprise. Yet at the author points out: “A surprise is having new information that violates our previously held assumptions. A surprise, in other words, is the feeling of an old belief breaking. The surprise here was that our assumptions about how off-putting new communications technologies were turned out to be absolutely worthless.” P. 100

Yet, Shirky remains both optimistic and realistic: Listen to the following:

“Given the right opportunities, humans will start behaving in new ways. We will also stop behaving in annoying old ways, even if we’ve always tolerated those annoying behaviors in the past.” p. 100

“Ways of coming up with the right answer that involve simply asking other people, without internalizing the process, don’t actually educate the student.” P. 148.

“Throwing off old constraints won’t lead us to a world of no constraints. All worlds, past, present and future, have constraints; throwing off the old ones just creates a space for new ones to emerge. Increased social production heightens persistent tensions between individual and group desires.” P. 162-163. (emphasis is mine).

For me, Clay Shirky’s Cognitive Surplus – Creativity and Generosity In A Connected Age, possessed the power to stimulate my imagination, energize my creative thinking and require me to embrace the prospects for the possible, well beyond the boundaries I came to the book with. Listen to Shirky:

“The world’s people, and the connections among us, provide the raw material for cognitive surplus. The technology will continue to improve, and the population will continue to grow, but change in the direction of more participation has already happened. What matters most now is our imaginations. The opportunity before us, individually and collectively, is enormous; what we do with it will be determined largely by how well we are able to imagine and reward public creativity, participation, and sharing. P. 212

In a world deeply embroiled in vicious attempts to hold onto the past coupled with the tension inherent within the necessity to create and innovate – Clay Shirky’s Cognitive Surplus – Creativity and Generosity In A Connected Age is a work that must be devoured to inform this dialog.

Like I said, one of my Top Ten for 2010. A spectacular contribution.