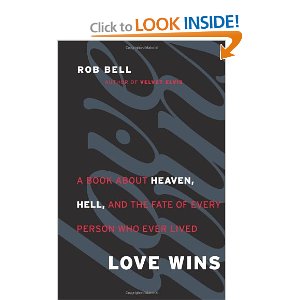 Bell, Rob LOVE WINS – A Book About Heaven, Hell, and The Fate of Every Person Who Ever Lived, HarperOne – An Imprint of HarperCollinsPublishers New York, NY Copyright © 2011 by Robert H. Bell Jr.Trust.

Every tales exacts a toll….What might the Toll of Rob Bell’s “Love Wins” Tale really be? 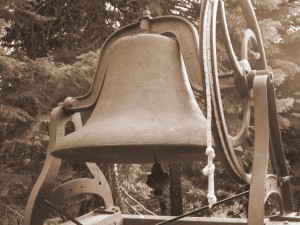 Controversy? I’ll give you my take on the controversy…

In his book, Practice Resurrection – a conversation on growing up in Christ, theologian Eugene Peterson observes: “We’ve been at this for two thousand years now, and people are not clamoring to join us.”[i] Why? In his recently released book, Maximum Faith – Live Like Jesus, based upon years of research, George Barna asks a pertinent question: “why then is it that more than 80 out of 100 Americans call themselves Christian, yet only 1 out of every 100 are broken, surrendered, submitted and loving?” [ii] In his book “unChristian – What a New Generation Really Thinks About Christianity and Why It Matters,” David Kinnaman’s research indicates “If outsiders stop listening, we cannot just turn up the volume.”[iii]

“Wow!” you might exclaim. “How’d we ever get in this predicament? It’s like “Where are we?” Well, any thorough reading of history will reveal that the frameworks and narratives that “validate spiritual order tend to lose their credibility with time, and need to be recast in new forms again and again.”[iv]

1. People are not clamoring to join us.

2. Only one out of a hundred of us evidence a loving life fully submitted to Christ.

3. Outsiders have tuned us out. We cannot just turn up the volume.

What’s up with this?

Peterson, Barna and Kinnaman can hardly be characterized as heretics, agitators, lunatics, shock-jocks or those who poke and prod from the fringe of faith in an attempt to attract a larger following as part of a ploy whose end result is self-centered, self-righteous, personal aggrandizement. No, these are men who have toiled earnestly and humbly for decades in the trenches of mainstream Christianity – applying their gifts through study, research, scholarship, and speaking. The cumulative total of books these three have authored is in the dozens. Their life’s work has not been about them – It’s been, and continues to be, about us – Jesus, you and me – the Church and the state of the Christian faith in North America.

Why should we listen to the messages from people like this? Perhaps you’re one of those who are satisfied with the following response to the question from C.S. Lewis when he wrote:

“We must therefore not be surprised if we find among Christians some people who are still nasty. There is even, when you come to think it over, a reason why nasty people might be expected to turn to Christ in greater numbers than nice ones. That was what people objected to about Christ during His life on earth: He seemed to attract ‘such awful people.’ That is what people still object to and always will.”[v]

Doesn’t Lewis’ quote make it easy to blow off reading the rest of this review? I mean, that is C.S. Lewis addressing the ‘Why’ question. Good enough for you? I hope not. It’s not good enough for me. Keep reading.

Who Do You Think You Are?

Rob Bell’s book LOVE WINS – A Book About Heaven, Hell, and The Fate of Every Person Who Ever Lived, is terribly pertinent to the above. It caused me to pause, to ponder to pray. I was led to an old book, with present subject pertinence. In Leonard Ravenhill’s classic from 1959, Why Revival Tarries, I found some insights. Allow me to share my journey with you:

“This generation of preachers is responsible for this generation of sinners.  At the very doors of our churches are the masses – unknown because they are unreached, unreached  because they are unloved.”[vi] (emphasis is mine). Of course, it would be inaccurate and unfair to assign the responsibility for the Why question on solely preachers and clergy. As Ravenhill points out, There are three persons living in each of us: the one we think we are, the one other people think we are, and the one God knows we are.[vii]

In terms of the first of three persons Ravenhill characterizes; who we think we are – frankly, we think we’ve arrived as Christians. We deem our faith and relationship with Jesus as sufficient. We’re “enough in Christ. A.W. Tozer characterizes it this way: “We have been snared in the coils of a spurious logic which insists that if we have found Him, we need no more seek Him.”[viii]

In terms of the second person that inhabits our individual and collective being, the one other people think we are, – has become defined by what we say we believe. Unfortunately, our worship of the idol of the righteousness of belief has produced a lovelessness that others recoil from. As David Kinnaman has written, As Kinnaman says, “We can’t change what we are known for unless we change how we live.”[ix] (emphasis is mine). Tozer chimes in stating: “Orthodoxy, or right opinion, is, at best, a very slender part of religion.  Though right tempers cannot subsist without right opinions, yet right opinions may subsist without right tempers.  There may be a right opinion of God without either love or one right temper toward Him. Satan is a proof of this.”[x] (emphasis is mine).

Finally, what about the third dimension of Ravenhill’s characterization – the one God knows we are? Perhaps, part of the response to this question requires – well – another question. “The question “who do you say that I am?” demands not a theoretical answer but a practical answer, a lived answer.”[xi] As Leonard Sweet has said, “With Christians now largely indistinguishable from non-Christians in how they live and think, there is no longer a startling freshness to the proclamation of biblical truth when it is presented as principles and propositions.  How a person lives speaks much more loudly than what he or she asserts, now as always.”[xii]

May Love Begin To Win?

George Barna wrote the following some years ago, that remains pertinent to the issues raised in this review. Barna wrote:

“Rather than rewarding prophets and entrepreneurs, the group suddenly rewards those who are compliant and benign.  Denial of reality undermines the health of the group; those who strive to address reality pay the price for their honesty and courage.”[xiii]

It has been said that “We discover who we are face to face and side by side with others in work, love, and learning.”[xiv] It takes courage to write a book like Love Wins. Frankly, it took guts. I also digested it as a work from a heart of love. I thought of this quote as I was reading the book:

“If fear is a condition of courage, so too is love. It is love that makes us willing to sacrifice, love that gives us courage. The one fear we must all guard against is the fear of ourselves. Don’t let the sensation of fear convince you that you‘re too weak to have courage. Fear is the opportunity for courage, not proof of cowardice. No one is born a coward. We were meant to love. And we were meant to have the courage for it.”[xv]

I’ll conclude with the words of Carl F. Henry, as it relates to the spirit and courage of Rob Bell’s book, Love Wins….

“Contemporary evangelicalism needs to discard elements of its message which cut the nerve of world compassion as contradictory to the inherent genius of Christianity.”[xvi]

Rob Bell – fruitcake as some have cruelly characterized him? Heretic? Lunatic? We are all called to bear  fruit evidencing the love of Christ. Fruitcake — No — I don’t think so…. As Brian McLaren has recently written: “It‘s fruitless to argue being versus doing: you can’t do what you won’t be.”[xvii] (emphasis is mine).

The tangible controversy that inhabits this book is the Toll of the Tale…think about it…deeply…seroiusly…every dimension of it.

May love begin to win!

Any authors names or excerpts from works used herein do not denote agreement with the context within which I have used them in this article and/or denote any  support for Rob Bell’s thesis in, or endorsement of, the book  “Love Wins.”

[iv] Csikszentmihalyi, Mihaly The Evolving Self – A Psychology for the Third Millenium, Harper Perennial – A Division of HarperCollinsPublishers, Copyright © 1993 By Mihaly Csikszentmihalyi. P. 240.

[xii] Sweet, Leonard  Out of the Question… into the Mystery – Getting Lost in the Godlife Relationship, WaterBrook Press Colorado Springs, CO Ó Copyright 2004 by Leonard I. Sweet. P.21.