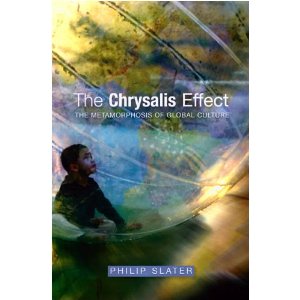 Once again, sociologist Philip Slater provides us with a treatise on the metamorphosis of culture – this time – global culture. The book contains a number of little gems. This book is a diamond in the rough regarding perspectives on cultural evolution. Here are a few of my favorites.

Jared Diamond, in his study of failed cultures, observes that what usually decides whether a society survives or collapses seems to be a “willingness to reconsider core values.” P. 5

‘We’re an evolving species…The environment – even social and cultural contexts – can switch genes on and off. P. 12.

Every new culture retains parts of the one that preceded it. p. 27

A cultural system can make people believe the most bizarre ideas – even be willing to die for them, and to kill others for not sharing them. It can transform the most unpleasant kinds of behavior into cherished virtues. P. 29.

Innovation comes from outsiders. Those most deeply committed to, and successful in, an old system will be the last to notice a radically new idea, and will be most resistant to it. When change comes, it’s the outsiders – those uncommitted to the status quo –who are poised to catch the wave. P.53

This desire to cleanse the world of ‘evil’ has led to virtually all the great atrocities of history. P. 74

We’d also have an easier time living if we thought of ourselves as verbs rather than nouns – as events rather than as objects. P.  82

Concentration of power equals abuse of power for the only way not to abuse power is to share it. Such concentrations are blood clots in the circulatory system of society. When an artery becomes clogged, blood doesn’t get to the brain or the heart and people have strokes and heart attacks. Concentrations of power and wealth have a similar effect on the body politic. The circulation of wealth, resources, and, especially, ideas, is blocked. In a healthy system, information flows are unimpeded by clots of power or the sclerosis of hierarchy. P.100.

In the old industrial economy workers were expected to be as robotic as possible, and rote training in school prepared them to function well on assembly lines. But in today’s economy the  emphasis is on information, services, invention demanding imagination, creativity, and social skills – diametrically opposite requirements. Adaptation to the future means retooling our schools to make them relevant to the world we live in. p.105.

A lot of wasted energy is required to sustain artificial barriers.  p. 137.

Reading this book is NOT a waste of energy. Invest in yourself – read this book – and bust through some artificial barriers in the process. Like I said – this book is a diamond in the rough and tumble of perspectives on the evolution of cultural change – a perspective distinctly worthy of digestion.