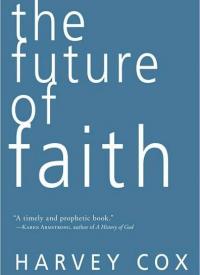 The Future of Faith by Harvey Cox – HarperOne – An Imprint of HarperCollinsPublishers – New York, New York Copyright © 2009 by Harvey Cox

Harvey Cox is Professor of Divinity Emeritus at Harvard University. He retired from the faculty in 2009, where he has taught since 1965.

I am fascinated by this book. It is truly the epic summary of the life’s work of one of the most profound theological thinkers and teachers for the past 50+ years — an American one at that.

The book begins with a question: “What does the future hold for religion, and for Christianity in particular?” Cox proceeds by guiding the reader through three phases of the evolution of Christianity: The Age of Faith, The Age of Belief and the Age of the Spirit. Throughout each phase Cox provides an incredibly rich context for the points he is illuminating. This approach gives the texture of the book one that is logically presented, easy to follow — and maintains the reader’s hunger for more. I found I was unable to put it down and when I did, came back hungry for another helping.

Where does Cox end up at the conclusion? Listen to these excerpts: All signs suggest we are poised to enter a new Age of the Spirit and that the future will be a future of faith” (p.224). “Faith is resurgent, while dogma is dying. The spiritual, communal and justice-seeking dimensions of Christianity are now its leading edge as the twenty-first century hurtles forward, and this change is taking place along with similar reformations in other world religions” (p.212).

Yet, it would be inappropriate to simply leave you with the bottom-line conclusions of this epic contribution. It is the richness of the writing, the masterful, insightful weaving of history, and the sharing of attention grabbing wisdom that accompanies the reader throughout this entire book, that makes it apparent that you are in the midst of a story being shared by a very wise and leaned friend. Allow me to share a few more excerpts to illustrate this important point:

“People turn to religion more for support in their efforts to live in this world and make it better, and less to prepare for the next” (pp.2-3) Cox makes an important distinction between faith and beliefs throughout the book while weaving the weight of history into support his positions. According to Cox, Faith is about deep-seated confidence – vital for the way we live – it is primordial – hope and assurance that translates into the way we live our lives — each and every day (pp.3-5). Belief, according to Cox, is more like opinion – We can believe something to be true without it making much difference to us. Creeds are clusters of beliefs. Christianity is the story of a people of faith who sometimes cobbled together creeds out of beliefs. It is also the history of equally faithful people who questioned, altered and discarded those same creeds” (pp.3-5).

For the author, “To be a Christian meant to live in his Spirit, embrace his hope, and to follow him in the work that he had begun” (p.5). So, where are we today? “We stand on the beautiful threshold of a new chapter in the Christian story – Christians on five continents are shaking off the residues of the second phase (the Age of Belief) and negotiating a bumpy transition into a fresh era for which a name has not yet been coined. I would like to call it the Age of the Spirit” (p.8).

As we “transition” into this new Age of The Spirit that Cox clearly observes (and provides ample evidence to support said observations), he provides some insights, challenges and suggestions:

“How the new can grow out of the old without wasting time trying to dismantle it” (p.173).

Faith is returning to become “a primary life orientation” (p. 179) — not intellectual assent to a box of beliefs, creeds, doctrine and dogma.

“Christianity came to birth in the midst of a cultural change — it is a movement born to travel – it takes on life with each succeeding cultural transition – But for this to happen again, some old wineskins must be discarded, and the incubus of a self serving and discredited picture of Christian origins must be set aside” (p.184)

“The fact that the most fruitful and exciting movements in Christianity today are taking place on the margins of existing ecclesial structures should not surprise anyone. Historically speaking, “schism” and “heresy” have often heralded the deepening and extension of the faith. Sometimes they are condemned, sometimes honored, and sometimes both, starting with the first and only later ending up with the second” (p.197).

“One clear Christian example of the both the renaissance of spirituality and the transmutation in the nature of religiousness is what is being called the emerging church” (p.218)….emphasis is mine.

What does Cox conclude? “A religion based on subscribing to mandatory beliefs is no longer viable” (221).  “The wind of the Spirit is blowing. One indication is the upheaval that is shaking and renewing Christianity. Faith, rather than beliefs, is once again becoming its defining quality” (p.223).

I can live with that. Can you? A priceless treasure. DEVOUR it!