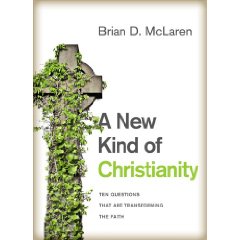 Pre-order this book! According to McLaren, “I stopped knowing a lot of what I previously knew about fifteen years ago” (p.137). Brian’s not alone. He has loads of company. Yet, this simple admission requires courage, humility and thirst. Courage to admit the ever encroaching discomfort of what we were formerly comfortable with. The humility to depart from the power and prominence that certainty sustains. The thirst to repent…“where repentance means more than being sorry — it means being different” (p.77).  It launches us on a quest. The quest to get honest. In Mclaren’s words, this quest for honesty (p.231) that he illuminates looks something like this:

“The mid-twentieth century hit many of us like a heart attack: What have we done? What had we become? What went wrong with us?”

Between something real and something wrong, Mclaren identifies Ten Questions That Are Transforming The Faith. These questions inhabit the seventh quest: “The quest to heal what we have so disastrously broken, the quest to unify and liberate what we’ve tragically divided and conquered, the quest to rediscover a larger and more beautiful whole rather than pit part against part in deadly conflict.”

This work is a recognition and an invitation:

The recognition sounds like this: “We must stop being ashamed of our questions, and we must stop pretending  to be content with unsatisfying answers” (p. 257).

The invitation reaches out like this: “These ten questions have a special power to stimulate the conversations we need to have. And these conversations, in turn, can become the context for new friendships among unlikely people. And taken together, those questions, conversations and friendships have the potential to simultaneously weaken old, rigid paradigms and to help us imagine new and better possibilities. I sense the wind of the Spirit of God in these questions, and in them I feel a powerful summons to faith, hope and love” (pp.18-19).

In contemporary theological circles, the issues of the decline of the emerging church or emerging Christianity or the pace of the encroachment of secularism into former bastions of faith seems to be a hot topic at present (when weren’t they – particularly amongst those who have a 2,500 year history of debating who is in and who is out?). Some have succumbed to the urge to author the obituary of these new blossoms within the foliage of faith. Contrary to the perspective of these pundits, Harvard’s Harvey Cox arrives at a diabolically different conclusion in his recent book,  The Future of Faith: “All signs suggest we are poised to enter a new Age of the Spirit and that the future will be a future of faith.”

“A New Kind of Christianity is not simply new — in the sense of a new tree being planted at some distance from an old one. It is, rather, the green tips growing out on many of the fragile branches of the ancient tree of faith and spirituality that has been growing throughout history.” (pp.228-229).

As Cox writes in The Future of Faith: “Faith is resurgent, while dogma is dying. The spiritual, communal and justice-seeking dimensions of Christianity are now its leading edge as the twenty-first century hurtles forward, and this change is taking place along with similar reformations in other world religions” (p.212).

Mclaren’s A New Kind of Christianity – Ten Questions That Are Transforming The Faith serves to provide the essential inertia fundamental for realizing the prognostications of Cox.

4 thoughts on “A New Kind Of Christianity by Brian McLaren”