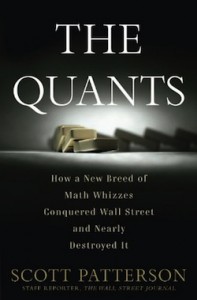 The Catastrophe of Certainty

In his fascinating book entitled “On Being Certain – Believing You Are Right Even When You’re Not,” neuroscientist Dr. Robert A. Burton concludes the work with this poignant phrase: “We do not need and cannot afford the catastrophes born out of a belief in certainty.”(pp.223-224).

Well, the Wall Street Journal’s Scott Patterson chronicles the catastrophe that Dr. Burton’s conclusion alludes to in this riveting volume entitled, THE QUANTS – How a New Breed of Math Whizzes Conquered Wall Street and Nearly Destroyed It. Patterson states his case bluntly: “In other words, there is no single truth in the chaotic world of finance, where panics, manias, and chaotic crowd behavior can overwhelm all expectations of rationality. Models designed on the premise that the market is predictable and rational are doomed to fail. When hundreds of billions of highly leveraged dollars are riding on those models, catastrophe is looming.” (P. 294).

Human history appears to be replete with disasters wherein one group seems ‘certain’ they have captured the ‘truth.’ The ongoing U.S. and global economic crisis is no different. Listen to Patterson:

The Truth was a universal secret about the way the market forked that could only be discovered through mathematics. Revealed through the study of obscure patterns in the market, the Truth was the key to unlocking billions in profits. The quants built giant machines – turbocharged computers linked to financial markets around the globe- to search for the Truth, and to deploy it in their quest to make untold fortunes. (p.8).

It was about money, of course, but it was also about proof. Each added dollar was another tiny step toward proving they had fulfilled their academic promise and uncovered the Truth (p.8)

To the quants, beta is bad, alpha is good. Alpha is the Truth. If you have it, you can be rich beyond your wildest dreams. (p.8).

What happened? Patterson’s perspective on this historical epoch is essential reading for those interested in economics, culture and human behavior. It is also a treatise about man and machine. He writes, “Always trust the machine” was the mantra.” (P.128). It’s also about our human appetite for order and predictability, as well as our propensity to become victims of the illusory: “The model created an illusion of order where none existed.” (P.196). “To quants, unprecedented is perhaps the dirtiest word in the English language. Their models are by necessity backward-looking, based on decades of data about how markets operate in all kinds of conditions. When something is unprecedented, it falls outside the parameters of the models. In other words, the models don’t work anymore.” (Pp. 271-272).

Patterson does an absolutely spectacular job profiling the key players, organizations and belief systems that fueled the growth in hedge funds from $39  billion in assets in 1990 to $490 billion in 2000, and $2 trillion in 2007. How? How could such a rate of growth be sustained? Patterson’s take: “the model was a jury-rigged formula based on the irrationally exuberant, self-reinforcing, and ultimately false wisdom of the crowd that assigned make-believe prices to an incredibly complex product. For a while it worked, and everyone was using it. But when the slightest bit of volatility hit in early 2007, the whole edifice fell apart. The prices didn’t make sense anymore. Since nearly every CDO manager and trader used the same formula to price the fizzing bundles yet another instance of crowding that results from popular quant methodologies – they all imploded at once.” (P.195).

I can’t wait for the next book by Scott Patterson. THE QUANTS – How a New Breed of Math Whizzes Conquered Wall Street and Nearly Destroyed It is distinctly a five star work of art. Essential reading. You’ll love it. Spellbinding!