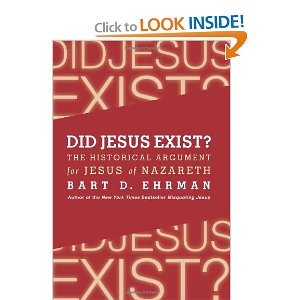 NOTE From The Editor: First, allow me to express our sincere thanks to Dr. Bart D. Ehrman of UNC – Chapel Hill for agreeing to this interview. Thanks also to Julie Burton, Publicity Director at HarperOne in San Francisco. Dr. Ehrman’s contact info is below: 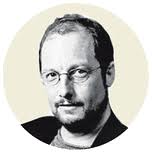 Bart D. Ehrman is the James A. Gray Distinguished Professor at the University of North Carolina at Chapel Hill. He came to UNC in 1988, after four years of teaching at Rutgers University. At UNC he has served as both the Director of Graduate Studies and the Chair of the Department of Religious Studies.

Among his most recent books are a Greek-English edition of the Apostolic Fathers for the Loeb Classical Library (Harvard University Press), an assessment of the newly discovered Gospel of Judas (Oxford University Press), and four New York Times Bestsellers: Jesus Interrupted (an account of scholarly views of the New Testament), God’s Problem (an assessment of the biblical views of suffering), Misquoting Jesus (an overview of the changes found in the surviving copies of the New Testament and of the scribes who produced them) and Forged (discusses why some books in the New Testament are deliberate forgeries). His books have been translated into twenty-seven languages.

Among his fields of scholarly expertise are the historical Jesus, the early Christian apocrypha, the apostolic fathers, and the manuscript tradition of the New Testament.

Professor Ehrman lectures extensively throughout the country. Winner of numerous university awards and grants, he is the recipient of the 2009 J. W. Pope “Spirit of Inquiry” Teaching Award, the 1993 UNC Undergraduate Student Teaching Award, the 1994 Phillip and Ruth Hettleman Prize for Artistic and Scholarly Achievement, and the Bowman and Gordon Gray Award for excellence in teaching.

Professor Ehrman has two children, a daughter, Kelly, and a son, Derek. He is married to Sarah Beckwith (Ph.D., King’s College London), Marcello Lotti Professor of English at Duke University. He lives in Durham, North Carolina.

His most recent book is Did Jesus Exist? (HarperOne 2012). 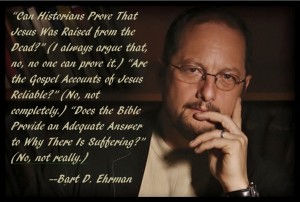 My review is here:  Here’s the interview:

1) What does being awarded the 2011 Religious Liberty Award by the American Humanist Association mean to you?

Ehrman – It meant a lot to me. I did not know about the organization until it honored me with this award. It is a terrific group of people who are sincerely, honestly, and openly searching for (and finding!) real meaning in life apart from belief in God or the acceptance of religion. I found the people at the meeting to be interesting, intelligent, and caring . To be recognized by a group like this for my work in scholarship – most interestingly, biblical scholarship, means that I am making a difference in ways that I think really matter. I should also say, though, that the humanists who make up this organization are not my only, or even my principal, audience for my writing. I do not see my work as embracing, necessarily, an atheist or agnostic agenda. Far from it. Many Christians (and Jews, and Muslims, etc.) find my work valuable as well – and I think that’s as it should be. If I am opposed to anything, it is fundamentalism in its various guises. Among everyone else, my views may seem challenging, but they should not seem threatening.

2) Why, in your opinion, has it taken a few millennium to arrive at the conclusions so eloquently laid out in this book?

Ehrman – I don’t think it has taken millennia for scholars to come to believe Jesus existed. ON the contrary, they have simply assumed he existed – since he existed! But to my knowledge, I am the first scholar of the Bible ever to attempt to prove that he existed. The reason no one else has ever tried to do so in a systematic and coherent fashion is that there really has been very little need, since almost everyone thinks he did exist. But with the emergence of the mythicists and their wide-ranging influence, I thought it was necessary for someone – a bona fide, qualified scholar – to take up the challenge and show why the evidence of Jesus is so overwhelming and convincing to everyone else on the planet who has ever looked into the matter.

Ehrman – Many Christians today think of Jesus as a 21st century American with good solid middle-class American values. He believes in the free market and the principles of capitalism; he believes in working hard to become successful in life; he subscribes to traditional family values; and so on. One of the points I make in my book, once I show that Jesus existed, is that to understand who Jesus really was, you cannot simply assume that he was like us. He was not, in fact, a 21st century American with 21st century American values, beliefs, perspectives, and concerns. He was a first-century Palestinian Jew, and all of his views were deeply rooted in his own historical and cultural context, just as ours are rooted in ours. Jesus was not a capitalist who subscribed to our family values. He was a Jewish apocalyptic prophet who believed this world and all its institutions were soon to come to a cataclysmic end when God intervened in history to overthrow the forces of evil (including, and especially, the government) and set up a perfect utopian kingdom on earth. That would happen within his own generation, before the disciples died off. As I stress in my book, the mythicists have in fact gotten the matter precisely wrong. It is not that Jesus is a non-historical being. He is not unhistorical. He is far too historical. He, like all of us, is rooted in his own time. And if you try to transplant him from his own time and place into ours, you radically alter his overarching message into something other than it originally was.

4) Former Secretary of State Madeleine Albright has written: “I regret that we have fostered a political culture that rewards the extremes, a culture in which dogmatic belief is deemed a virtue and open-mindedness a weakness, and sarcasm and slanderous attacks frequently drown out intelligent discussion. Haven’t we had enough of this? We need a dose of unity.”[1] On page 332, you allude to a similar concern (humanist camp). Can you illuminate any current efforts for intentional, collaboration between theists and humanists whereby they are engaged in accomplishing the objective of acting on a belief “in the power of humanity to make society and individual lives happy, fulfilling, successful, and meaningful.” (your words – p. 332).

Ehrman –I think people from a range of perspectives represented in modern American society can agree – for admittedly different reasons – on certain social agenda. We *all* should be overwhelmingly concerned to help people who are poor, hungry, homeless, oppressed, and generally suffering. For Christians: this is what Jesus demanded. For humanists: this is what our shared humanity demands. We may have wide ranging differences about things that really matter to us, but on this fundamental attitude toward life and our fellow humans, we can all, surely, agree.

5) My sense is you would be a tremendous author of fiction ( a sincere compliment). Do you have a novel within you that you are trying to find the time to write?

Ehrman –I wish I could! I could use a vacation home on the beach….

6) Clearly, as you state in the book, there were other humans, before and after Jesus, who claimed to be the messiah. How is the growth and development of the Christian faith explained after the death of Jesus, that is NOT represented in the adherents to other purported messianic figures who either preceded or followed Jesus?

The followers of Jesus said one thing about him that was said about no other messianic figure of the first century – or of any century.  They said that he was raised from the dead.  That changed everything.  It changed what it meant for someone to be the messiah.  It changed what it meant to worship the God of Israel.  It changed what it meant to be right with God.  It brought in an entirely new understanding of the divine realm, of God’s involvement with people, of the Jewish Law, of salvation, of the people of God.   It created Christianity.   No other religious movement had this kind of beginning.   The key to understanding the character of early Christianity, its view of Jesus as the messiah, and the reasons for its ultimate success, is firmly rooted in the claim that God raised Jesus from the dead.

Finally, a note of authentic thanks…from Bill Dahl…As you state in the book on page 267:
“To most of the students almost everything in the course is a complete revelation. Even though most of them were raised in the church and attended Sunday school for a good portion of their lives, they have never heard anything like what they learn in this class. That is because rather than teaching about the Bible from a theological, confessional, or devotional perspective, I teach the class – as is only appropriate in a state-supported, secular, research university – from a historical point of view.”
My hope is that this interview may serve to motivate other “theists” to buy the book and enjoy it as much as I have.
Thank you Dr. Ehrman.
NOTES:
(1)   Albright, Madeleine The Mighty and the Almighty – Reflections on America, God and World Affairs, HarperCollinsPublishers New York, NY Copyright © 2006 by Madeleine Albright, pp. 89-90.

Did Jesus Exist?: The Historical Argument for Jesus of Nazareth