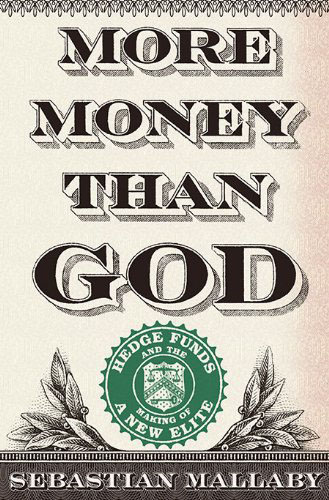 This is the magnum opus on the hedge fund industry. As other hedge fund related books seek to either vilify the industry or brazenly praise the uncanny good fortunes industry insiders – this book does neither – which I found refreshing and a strategic positioning of this work from “the rest.”

Sebastian Mallaby is currently the Paul Volcker Senior Fellow for International Economics at the Council on Foreign Relations. He’s also a columnist at the WA Post and spent over a decade with The Economist responsible for international finance coverage – serving a bureau chief in Washington, Japan and southern Africa. He is the author of several noteworthy books on the political economy.

This work is an epic contribution to the historical evolution of certain financial products and the global industry(s) spawned therefrom in primarily, the western world. Welcome to the hedge fund industry, including an amazing cast of characters, their thought processes, training, relationships and the outcome of their work – The Making of A New Elite – with More Money Than God.

Admittedly, it is rare for me to dedicate myself to the reading of 400+ pages contained in any one volume, on any subject. Yet, the manner in which this book develops contains the unique qualities that inflame the desire within reader to come back for more. Incredibly well-written, researched, balanced and apolitical. This work is REQUIRED READING as an essential component in developing an understanding of global financial markets, risk assessment, risk management and the art of speculation.

As I read the book, Mallaby makes some points that have been central themes of other authors (See The WSJ’s Scott Patterson’s – The QUANTS), regarding the miscues that fueled poor investment/risk management strategies. Listen to Mallaby to garner the essence of this observation as it relates to the “art of speculation” – “The art of speculation is to develop one insight that others have overlooked and then trade big on that small advantage.” P.91

“After the 1971 debacle, Weymar set about rethinking his theory of the market. He had begun with an economist’s faith in model building and data: Prices reflected the fundamental forces supply and demand, so if you could anticipate those things – you were your way to riches. But experience had taught him some humility. An exaggerated faith in data could turn out to be a curse, breeding the Sol of hubris that leads you into trading positions too big to be sustainable.”

“The real lesson of LTCM’s failure was not that its approach to risk was too simple. It was that all attempts to be precise about risk are unavoidably brittle.” P.231

(LTCM) Had misjudged the precision with which financial risk can be measured.”p.245.

The point is that an unrepentant belief in the quantitative modeling that provides that “one insight that others have overlooked and then trade big on it” can have enormous consequences in either capturing returns or accelerating a cataclysmic demise of the capital under management.

How has that all worked out, in recent years? According to Mallaby, “Between 2000 and 2009, a total of about five thousand hedge funds went out of business, and not a single one required a taxpayer bailout.”

Ah yes, “bailouts” – what is Mallaby’s take on this issue? Listen to the following: “Capitalism works only when institutions are forced to absorb the consequences of the risks that they take on. When banks can pocket the upside while spreading the cost of their failures, failure is almost certain.” P.13. Mallaby is clearly not a proponent of “privatizing the gains and socializing the losses.”

What about our affection with history that drive financial and other forms of socio-economic modeling. Mallaby has some succinct insights:

“Projections are based on historical prices, and history could be a false friend.” P. 233.

“In 1997, Merton and Scholes (LTCM) received the news that they had won the Nobel Prize for economics. The award was greeted as a vindication of the new finance: The inventors of the option-pricing model were being thanked for laying down a cornerstone of modern markets. By creating a formula to price risk, the winners had allowed it to be sliced, bundled, and traded’ l thousand ways the fear of financial losses, which for centuries had acted as a brake on human endeavor, had been tamed by an equation.” P.231.

So, where does Mallaby leaves us at the end of this magnum opus? His analysis leads him to conclude “The worst thing about the crisis is that it is likely to be repeated.” P. 377. However, to suggest that the hedge fund industry was the primary culprit in either the creation or magnitude of the Great Recession would be erroneous. Again, between 2000 and 2009, 5,000 hedge funds are to have ceased operations – none of which required a taxpayer bailout. Mallaby also takes a rather benign approach to the plausibility/practicality of regulating this industry (“The record suggests that financial regulation is genuinely difficult, and success cannot always be expected.” P. 379).

Yet, at the conclusion of this work, one quote from Mallaby continues to resonate with me: “It is the nonintuitive signals that often prove the most lucrative.” p.302. However, the term “lucrative” as is as applicable to assessing risk and thereby avoiding potential losses, as it is to capturing returns on investment.

Like I said, an epic contribution to the historical evolution of the hedge fund industry. An uncanny, incredibly thorough, balanced treatment – written in a way that is appropriate for both industry insiders, and the lay-person. A perfect volume for graduate coursework in finance — one that focuses on human beings, as well as the quantitative financial services products they develop and deploy in the global markets today.