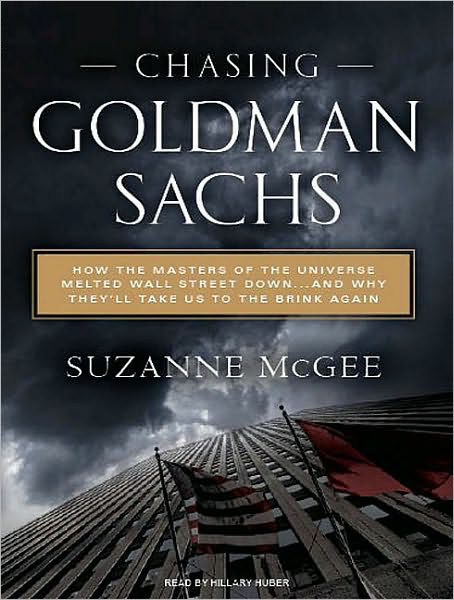 After having read and reviewed the following VOLUMES about U.S. economic crisis during 2010 — Roger Lowenstein’s, The End of Wall Street, The Quants by Scott Patterson, 13 Bankers by Kwak and Johnson, The Big Short by Michael Lewis, Sebastian Mallaby’s More Money Than God. Too Big To Fail by Andrew Ross Sorkin, A Colossal Failure of Common Sense – The Inside Story of the Collapse of Lehman Brothers by Lawrence G. McDonald with Patrick Robinson, Freefall by Joseph Stiglitz and Last Man Standing – The Ascent of Jamie Dimon and JP Morgan Chase by Duff McDonald,  — one begins to wonder if there is actually another volume worthy of an approach that these others seem to have overlooked. There is. It is Suzanne McGee’s Chasing Goldman Sachs –  How The Masters of the Universe Melted Wall Street Down … and Why They’ll Take Us to The Bring Again, Crown Business New York, NY. This is truly a brilliant contribution.

McGee is a career journalist focusing on the financial sector of society. She’s a contributing editor at Barron’s, was formerly a staff reporter at the WSJ (early career) and has been a financial markets contributor for the New York Post, Institutional Investor, Financial Times and Portfolio.com. She is a gifted writer, researcher and interviewer – the synthesis of which elevates this volume into the authentically unique class of “superbly crafted”  literary works.

In this book, Chasing Goldman Sachs, McGee provides an in-depth focus on three dimensions of the genesis of the U.S. economic crisis, that the aforementioned works do not: compensation policies, risk management failures, and regulatory shortcomings. McGee writes: “But the reason the bailout, however distasteful, was unavoidable is the same reason that it behooves all of these interested parties to find real solutions to the problems presented by compensation policies, risk management failures, and regulatory shortcomings. In all three, participants placed their own interests ahead of those of the financial system. If Wall Street-the money grid-is to survive future shocks, we can’t afford to have that happen again.” P. 173-174

In terms of the contribution of toxic compensation systems malignant integration with risk management, the following excerpts are poignant:

“Together, they would prove to be a recipe for disaster. All three revolve around human behavior, more specifically on the kinds of incentives that are present on Wall Street to take foolish risks and the disincentives that should be in place to keep that risk taking within reasonable limitations.” P.170

“Alas, while Wall Street paid lip service to risk management, in practice they tended to rely too much on models that even their architects were full of flaws. And too often they massaged those models to produce the results that were needed.” P. 171

“In an asymmetrical compensation scheme that lavishly rewards excessive risk taking but fails to effectively punish failure is toxic in any environment, but when it isn’t balanced by some broader consideration-the risks to the company, to investors, and to the financial system’s health – then it becomes even more lethal.” P. 207

McGee’s treatment of risk management on Wall Street is superb and provides new insights the fed the systemic failures, and provides the basis for essential targets of change. Listen to the following from McGee as she characterizes the “magical thinking” that evolved in the U.S. financial markets (McGee’s term – not mine):

“One of the biggest problems with risk is that its real level and nature are clear only with hindsight.” P.225. (emphasis is mine).

“Of course, everyone on Wall Street knows that their business revolves around risk. But when you ask them about it, they’ll tell you, “It’s not about Wall Street taking risks, it’s about Wall Street helping its clients offload what they consider to be unacceptable risks to another layer. It’s about risk transfer.” P. 227. (emphasis is mine).

“VaR,” (Value At Risk) like most other risk management models, is based on a series of assumptions, which in turn depend on probability and statistics. That means that VaR is shaped by what has happened in the past, and more specifically by what has happened most frequently. In some cases, there are a lot of data to draw on: the real estate market, for instance, has more than a century of reasonably reliable data, while the bond market has seventy or eighty years’ worth. A VaR places more reliance on recent history than it does on the broad sweep of past events, but the biggest shocks have no historical precedent.”p.243.

Finally, McGee’s treatment of the systemic failure of the regulatory apparatus that was designed to insure that nothing like this could ever occur, is another uniquely valuable contribution of Chasing Goldman Sachs.

As individuals, each of us has had the unfortunate experience of following the leader, or attempting to achieve benchmarks set by another. The same can be said within the context of industries, businesses and organizations of all shapes and sizes. At a certain moment in time, we realize we’ve arrived at a place we never intended to be – on the precipice of disaster. Such is the role that Goldman Sachs played (and depending upon whom you speak to, continues to play in both domestic and international financial markets).

McGee’s treatment of this curious tendency, seemingly endemic to human behavior, goes vastly beyond a simple demonization of Goldman. It has too. The strategic/systemic remedies being concocted must be informed by the stark realities that McGee succinctly characterizes in this work. However, the ongoing U.S. financial crisis is complex and populated with well-entrenched power brokers who have mountains of capital to burn to keep the system the way it is.

Rather than calling the CEO’s of Wall Street firms, hedge funds, special interest lobbies, hat-in-hand regulators, and the executives of the twelve largest banks to testify before Congress on these matters — perhaps it’s time to begin soliciting testimony from the investigative journalists who have spent their careers examining a myriad of dimensions U.S. financial system, the genesis of the Great Recession, and possess the essential, independent insights that may inform the dialog regarding the fundamental reforms that currently remain unaddressed.

·Voice of the Chairman, Phil Angelides: