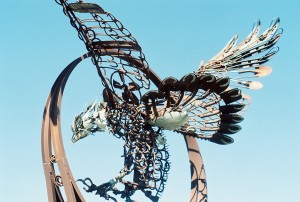 During the past several months or so, I’ve been considering the process of developing a new vision for community economic development. A process where people converge to converse about the development of a vision. I call this process Econverision.

Fyodor Dostoyevsky once said,  “a new step; uttering a new word is what people fear most.” Don’t get uptight. There’s nothing to be afraid of. According to London Business School Professor Charles Handy “Words are the bugles of social change.” (2) Let me explain.

In his most recent book, Hot, Flat and Crowded, three time Pulitzer prize winning author Thomas L. Friedman wrote that we must think strategically to:

“innovate our ways to new possibilities that right now seem unimaginable. The longer we wait to set out on such a strategic path though, the deeper the pail out of which we will have to climb.” (1)

This got me thinking. What does it mean to think strategically in 2009? Here are a couple of thoughts:

1. We have to think – deliberately, intentionally, differently. During economic downturns, many people assume the posture of what I refer to as the foxhole mentality – They hunker down and cover their heads, enduring the threat of their surroundings, repeating the mantra, this too shall pass. In other words, they maintain the position they occupied before their external circumstances changed. They assume that when the current shelling stops, the rules of engagement and the battle will remain the same. Furthermore, holding your ground, intending to repeat what you’ve been doing may not be a plausible battle plan as things improve.

2. How do you think deliberately/intentionally? – If the momentum in your life is anything like mine, you must make time, rather than attempt to find time to think. Yes, I’ve found that deliberate thinking about a particular subject can and must be intentionally scheduled – well, if its really worth serious consideration anyway.

3. Thinking strategically necessarily involves others – Yes, I continue to be amazed what occurs when you converge with others as a group with a common topic on the table. Particularly if the people gathered have a desire to explore creating something better than what presently is. Today, it’s probably more important that ever to consider a few new principles as it relates to involving others:

Invite the uninvited – Make a deliberate attempt to have those who have not traditionally participated in community economic development discussions to become a part of these forums. As Kenneth Cloke and Joan Goldsmith point out: “Revolutionary thinking often originates in young people, newcomers, outsiders and those at the bottom with little to lose, who bring a celebration of dissent and a wellspring of new ideas.”(3)

Expect the Unexpected – Leave titles, agenda, ego, position, authority and expertise at the door when you enter these forums. Come expectantly, desiring to hear and be inspired by an idea that comes from someone else. It means “creating a space that is free and inviolable, in which dissent and difference are encouraged and celebrated.”(4)

Shepherd the Sharing – The environment of these forums cannot be led by “captains of industry or power brokers, but by  leaders acting as coordinators, connectors, facilitators, mentors, coaches, and mediators who bridge, network and link people, and activate group energies to generate new configurations and possibilities.” (5)

According to an article entitled The Fiscal Roadmap – Why These Are Not Ordinary Times – We Need A Fiscal Roadmap To Show The Way – authored by Anne Vorce and Maya MacGuineas in December 2008 – they state:

Meeting our current and future economic and fiscal challenges will require the continued development of new ideas, the facilitation of a public conversation, (emphasis is mine) and the political will to make hard choices. We will need a fiscal roadmap to show us the way.

Yes, it appears that, once again, we are going to have to learn to change. What might this mean. Peter F. Drucker has suggested: “To be a change leader requires the willingness and ability to change what is already being done just as much as it is to do new and different things. It requires policies to make the present create the future.“ (emphasis is mine) (6)

There are three essential elements to Drucker’s thesis to evaluate, define,  and implement policies to make the present create the future. These include:

1. Abandon Yesterday – “to free resources from being committed to maintaining what no longer contributes to performance.” ( I would add that performance is henceforth re-defined by the new economic development vision).

2. Organized Improvement – “whatever an enterprise does internally and externally needs to be improved systematically and continuously.” (p.80).

3. Exploit Success – “Starve problems and feed opportunities.” (p.82). What this does not mean is to resist change and remain comfortable with going through the same old motions.

4. Systematic Innovation – Relying on the integration and implementation of the three principles identified above, change leaders must  “build into the enterprise a systematic policy of innovation – a policy to create change. “(p. 84).

Why do I advocate for the the development a “new vision” for community economic development through the process of econverision? For one, patriotism. I am not comfortable sitting around complacently “thinking about what the world will look like as the rest rise and the West wanes.”  (7) For me, it’s a personal responsibility as a privileged citizen of the community and nation within which I reside. It has been said that “what distinguishes economies today are ideas and energy.” (8) I can get really energized thinking about the economic development possibilities for the future in my community and my country. I bet you can too.

I also think it’s time to understand that we have entered a new period in our history that will require wholesale adjustments in the former ways we have approached economic development. Listen to the following:

“The last few decades have belonged to a certain kind of person with a certain kind of mind — computer programmers who could crank code, lawyers who could craft contracts, MBA’s who could crunch numbers. But the keys to the kingdom are changing hands. The future belongs to a very different kind of person with a very different kind of mind — creators and empathizers, pattern recognizers and meaning makers. These people — artists, inventors, designers, storytellers, caregivers, consolers, big picture thinkers — will now reap society’s richest rewards and share it’s greatest joys.” (9)

Why a vision? Think about it like this for a moment:

“Visions cause people to grow, learn and expand their abilities in order to achieve what they desire…Many changes start as a vision of what might be. …Every revolution starts with a personal transformation in which courageous leaders see that something is not working  and develop the determination to change it…They find it necessary to create confidence in others and convince them that the change is going to mean something, that the process will be open and hospitable, that the environment within which the change takes place will also be transformed.” (10)

The quote above (9) from Daniel H. Pink suggests we are moving from the Information Age to what he refers to as The Conceptual Age. I believe Cloke and Goldsmith would concur with Pink as they state:

“Every social, political and organizational revolution traces it’s origins to a conceptual revolution (emphasis is mine) in which someone had a new idea. Revolutionary thinking begins in the mind, then seeks ways of translating this vision into reality. It means being open to ideas that fundamentally critique the existing paradigm. and seek to trransform it. It means questioning stock answers and being committed to altering fundamentals. Because fresh ideas always come from outside the existing paradigm, imagination is the most important resource for leaders.” (11)

I am a tax paying, red-blooded American. I have children and grand-children. I’m competitive. I think it time to embrace the process of econverision in my community.

(10) Cloke, Kenneth and Goldsmith, Joan The End of Management And The Rise of Organizational Democracy, Copyright © 2002 by John Wiley & Sons, Jossey-Bass, A Wiley Company San Francisco, CA, excerpts from  pp. 172-174